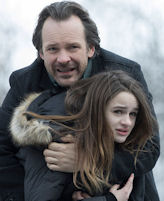 How far would you go to protect your family? Probably not far if your daughter was a jerk like Kayla. But that is not the point. Suspend disbelief for an hour or two and enter the world of Jay and Becca, Kayla’s estranged parents about to be brought back together under unusual circumstances. Indeed, the family is reunited with only a little blood spilled. Nothing too dramatic for Kayla if more trying for mom and dad. The reunion does not last long, only until the bell rings, followed by the knocks on the door. Hard knocks.

Marcus Seibert and Sebastian Ko’s screenplay of “We Monsters” is brought to the US screen by writer/director Veena Sud. After her Prime Time Emmy for best writing for “The Killing” in 2011, she went on to make spooky festival darling “The Salton Sea” in 2016. This adaptation rolls past tools from her horror kit into a lean and mean Halloween special. Sud reunites with Mireille Enos who was nominated for both Emmy and Golden Globe awards in “Killing.” Add a simmering Peter Sarsgaard and we have a winner of devilish proportions.

Sarsgaard showed us what he could do with dread in the downright-dirty-lie extravaganza “Shattered Glass,” scoring a well deserved Golden Globe nomination in the process. This movie has the same wonderful guilt factor that wears on the protagonists like a full-time migraine. Thanks to superlative acting and world class make-up, Mireille Enos ages thirty years in ninety minutes. She goes from being breathtakingly beautiful, a powerful, successful lawyer running her own show, to a wrinkled, lined shell barely able to mouth the question of what is happening to her, let alone figure it out.

Joey King adds her own great acting as Kayla, a teen entirely too big for her britches. This performance in the midst of her Golden Globe nominated work in “The Act” TV series rounds out a casting trio that could not have been better. Sam Ifrani supports the tight-knit crew with small but powerful appearances. Patti Kim and Nicholas Lea complete the cast with pitch perfect performances as the good cop and bad cop. Lie to them and you may as well lie to the devil himself.

Spare cinematography with first rate production shows what can be done in a low budget movie. Jason Blum and rest of the crew at Blumhouse did this one right, putting the money where it counted. The lighting is correct on the mostly night scenes which are broken up with “Fargo” style exterior shots, blindingly bright in an icy, unforgivable winter.

The first half of the movie demands tolerance, the setting up of the descent requiring some dubious moves. Give that a break and stay with the action. By the second half you know this is a flick that will have a gleefully gruesome ending. If more of a TV episode than a film, Hitchcock himself never did it better.