Review: The Lost City of Z

Hardly the swashbuckling story on might expect, “Z” focuses on the life and motivations of British explorer Percy Fawcett (Charlie Hunnam). Like many others, he explores the Amazon jungle in the early 20th century looking for a legend. However, his motivation is not riches, but the elevation of the aboriginal people into a true nation, as opposed to the chaotic, feral population of the western perspective. 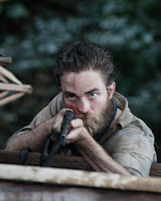 Fawcett’s persona, and that of his aide-de-camp Henry Costin (Robert Pattinson), is more Shakespeare than Indiana Jones. He almost never lays his hand on a gun and seems quite willing to march into storms of poisoned arrows without a defense. His throwing together of a ridiculously indefensible raft would seem to be typical of the time, but his tendency to go native when all is lost is not. Fawcett is at his best when he is living at one with the environment.

Initially declining his first mission to map a political border, Fawcett, essentially, is blackmailed into the task with the offer of redeeming his family name. As the story goes, his dissolute father had lost his reputation, and his money, through drink and gambling. The explorer is not much motivated by the prospect of improved social status. He is motivated by finding a civilization to replace the one in which he is living and which destroyed his father. This undercurrent of rebellion conflicts with his love of his devoted wife and children. In the end, he and his son (Tom Holland) will disappear without a trace into the rain forest.

The previous films of writer/director James Gray (based on David Grann’s nonfiction bestseller) juggled issues of alienation and redemption against long odds, and this one is no exception. The explorer is scorned by his new-found fellows in England’s prestigious Royal Geographical Society not so much for his foolhardiness as for his ambivalence towards economic gain. The explorers of the time were not supposed to be collecting pottery, they were supposed to be establishing mines and rubber plantations, if not outright robbing gold and jewels.

Fawcett’s reactive spirit brings him into conflict with a slimy RGS kingpin played to the hilt by Angus Macfadyen. Channeling Wayne Knight’s fat, greedy and hopelessly feckless Dennis Nedry in “Jurassic Park,” Macfadyen’s character represents everything bad about modern civilization. Gray throws this in the viewer’s face as a blunt-edged example of what Fawcett is not. Although Fawcett makes his point by resigning from the RGS, he is slowly succumbing to his failure to achieve the honor and position for which he is doomed to strive.

Great camera work by Oscar nominated Darius Khondji (“Evita”–1996). Good supporting performances by Robert Pattinson and Tom Holland help to shore up the less than exciting character of Fawcett himself, but the result is still a film that could use a little more action and a little less paddling.