At the end of the second semester at Mount Holyoke Female Seminary, circa 1850, the students were asked, “Do you wish to come to God and be saved? Those who wish to be Christian and be saved will move to my right. To those who remain and hope to be saved you will move to my left.” One student moves neither place. The school mistress responds, “You are alone in your rebellion Miss Dickinson.” 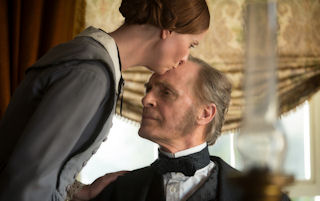 Dad, sister and brother come to take Emily home via a stay at an aunt’s in Boston. Her father takes them to a music recital. When a woman sings, he disparages her for being on a stage.

As an English teacher, I can respectfully say Cynthia Nixon epitomizes the reclusive, possibly gay, acerbic Dickinson. When Emily goes into paroxysms of a seeming epileptic attack, Nixon captures the scary horror. When she is in conversation with her sister-in-law, who has been suspected the object of Dickinson’s desire, she is carefully noncommittal. When approached by visitors she is inexplicably, though cleverly, rude. Nixon’s work is magnificent.

However, as great as Nixon is, the film is not. Belabored with an abundance of spoken poetry, this is not Dickinson 101. An audience unfamiliar with her work will most likely understand very little. Most of Dickinson’s work must be studied, savored and understood through careful reading. Hearing multiple lines written in idiosyncratic syntax as well as 19th century American English is a tough introduction.

Briefly reviewed in a few sentences by IJM for the Portland International Film Festival in February, it was noted that Cynthia Nixon excelled as Dickinson and Terence Davies, director and screenwriter, deserved tremendous credit for a painstakingly careful study of Dickinson’s personality and poetry.

However, because Dickinson’s reclusive life was mainly internal, the slow and deliberate British-made film, redundant with Nixon’s recitations of Dickinson’s poetry, will remain difficult to appreciate by an audience not prepared by a significant study of Dickinson’s work beforehand.

Perhaps best for Advanced Placement English and college classes, “A Quiet Passion” will bravely open, probably on the strength of its phenomenally well-prepared cast, in New York on April 14, and at the Laemmle Royal in Los Angeles on April 21. A national release will follow. 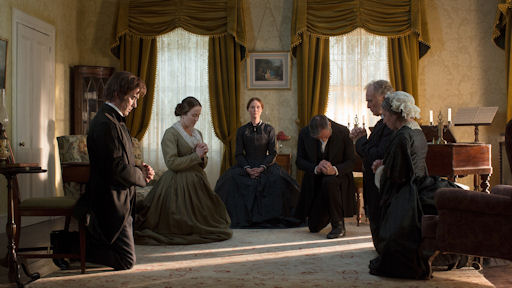