Their son sleeps with two blond cubs cuddled gently around him. A long-nosed black and white furry badger clutches like a baby to a human. A dromedary, aka a one-humped camel, scurries humorously around the zoo grounds in free abandon. 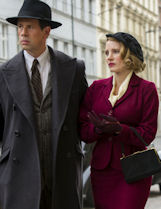 This seemingly innocent film opens with a party that the zoo director’s wife is awkwardly hosting with her husband at their modest villa on the zoo grounds. As she drops something on the floor, chaos breaks out. One of the beloved elephants just gave birth, but the calf is not breathing. The bull elephant is bellowing and stomping the grounds.

As the guests trail after her, Antonina (Jessica Chastain) rushes to the elephant cow. Her first rule is calmness. Her soft, self-confident, affectionate nature towards the distressed mother elephant and bellowing bull introduces the audience to the essential character of Antonina Żabiński, the zookeeper’s wife. She is a spirit of safety.

As Antonina pacifies the mother, as she will later attempt with her Nazi nemesis, she is allowed to approach the new infant and unblock the air passage so that it can live. As Antonina instinctively and intelligently devises a way to save the elephant calf, she will ultimately work to save those who become encaged in the Warsaw Ghetto and in grave danger of death.

At the core of Antonina’s being is an uncanny sensitivity, possibly the result of being a child of trauma. Brought up in Russia, her parents were killed by the Bolsheviks in the early days of the Russian Revolution. Perhaps scarred by the terrors of mankind, she finds the animals in the zoo her closest friends.

Set in the great Warsaw Zoo from 1939-45, the story of “The Zookeeper’s Wife” is basically a true account of a zoo director, Jan Żabiński (Johan Heldenbergh), and his wife, Antonina Żabiński, during World War II.

Working from Antonina Żabiński’s diary and Diane Ackerman’s book, Angela Workman develops a screenplay that not only commemorates the bravery and integrity of Jan Żabiński’s participation in secreting Jews into the zoo and participating in the Warsaw Uprising, but the courage and honor of his wife who shows us a path to a different kind of strategy in the battle against the dark side.

Together, using the zoo’s underground labyrinth of tunnels and cages, both Żabińskis try to save about 300 Jews despite ever-present risks that propel the story with increasing danger and suspense.

The lovely Ackerman, a naturalist, writer and poet, came across Antonina’s diary while she was researching an article on Polish horses for The National Geographic. While arranging her trip to Poland her Polish neighbor revealed he had an uncle who had been a veterinarian at the Warsaw Zoo during the war. From the uncle she learns about Antonina’s diaries, still packed away in the basement of the zookeeper’s villa, and is granted access to them.

While Ackerman had also been reconnecting with her own Polish roots and the exit of her Jewish parents from pre-war Poland, Angela Workman, a screenwriter noted for her work in developing historical context for films, connected to Ackerman’s book. Her Jewish parents had also immigrated from eastern Europe.

Chastain, both star and executive producer, researched the Holocaust and visited Auschwitz. Her serious preparation convinced Ackerman, who sold the rights to The Zookeeper’s Wife in 2008, that she was the right person to carry on the sacred task of transforming Antonina’s story to the screen.

A lasting memory is Antonina cradling an infant rabbit and handing it over to a viciously attacked young Jewish girl who had lost her sense of self. This interaction in the film between animal and human lends hope, comfort and healing to a world lost in craziness.
The film is haunting in its juxtaposition of gentle kindness and insane brutality. Its abundance of metaphors reflect the poetic nature and moral truths of an inspired collaboration between Żabiński, Ackerman, Workman and Chastain, four women demonstrating a timeless kindred spirit and uncommon depth of insight. 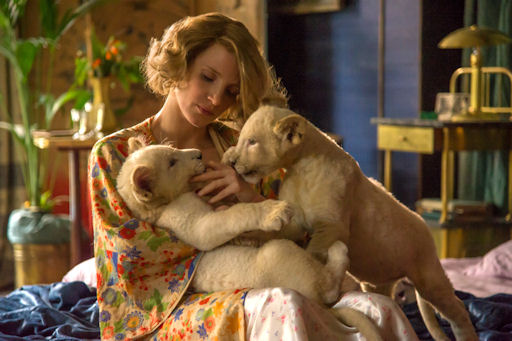