Review: The Man Who Invented Christmas 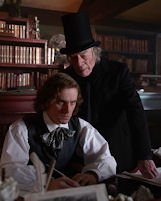 The season for tall tales is upon us and what better centerpiece than the immortal spook of all tales, “A Christmas Carol.” Dickens wracks his brain for a story as the writer’s worst nightmare looms. Poverty, homelessness, loss of a byline. Through those marvelously romantic London streets he roams. Sighting all manner of dreadful and exciting happenstances, and hearing others including praise and the occasional loony laugh. Not catching the plague, fortunately, for then there would be no Christmas at all.

Or so Bharat Nalluri film would have us believe. The film is not so much a period piece as it is a walk through the looking glass into the creative mind. The pain of creativity is that it is not usually there. It never comes when one wants or expects it and when it does it is often misdirected. No matter, there is plenty of time for other stories.

As Dickens rages, broods and weeps his way through a dreadful period of blockage, he turns inward, like Scrooge himself. Instead of grasping and cherishing the inspiration around him he blames Christmas for his own poverty and failure. It is only when he brings happiness to others that he finds reciprocal gifting in the form of characters literally moving in with him.

In her narrative feature film debut, Susan Coyne raps out a screenplay worthy of the best of them. Based on the book by Les Standiford, Dickens is so wrapped up in his own world that he cannot see the plethora of characters around him. Luckily for us he seems to have found his way, as Tiny Tim, Scrooge, Marley and all the rest pop out of the screen and into being in his immortal tale. Haunting dreams, you say? Maybe so, but dreams are the stuff of great novels. One simply has to learn to live with them.

First rate sets and costumes make a big difference, but it is a charmed performance by Dan Stevens (“Downton Abbey”) that carries the day. Stevens’ delightful cheekiness, reminiscent of a touch of Johnny Depp at his best, is brought to life through the spot-on photography of lenser Ben Smithard. Smithard learned cheekiness from the source itself, having shot Steve Coogan in two of his best flicks, “Alan Partridge” and “The Trip.” Paki Smith’s set design is a nod to the fantastic fantasy of his work on the Batman franchise and his recent set design for “Mary Shelley.”

Christopher Plummer provides a yeomanlike supporting performance as Ebenezer Scrooge. Father John Dickens (Jonathan Pryce) is even on hand, although it is hard to say why.

Shylock lawyers, fame and fortune hunters, skinflint businessmen cruise in and out of the scenes along with the London we would all die to see. Or, might possibly die in the seeing, if the cholera bug was having an up day. Amongst the brutality of the workhouse, the lethal loneliness of the orphanage and the tubercular miasma of the London winter, a friend emerges. 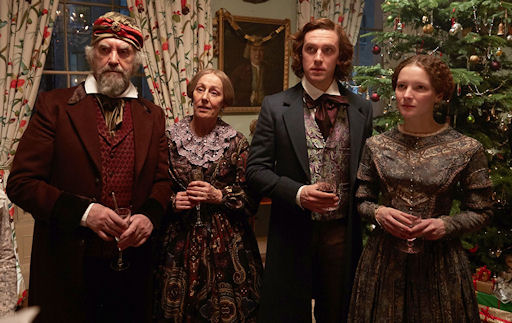