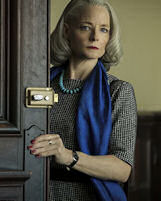 Two thought patterns run through the minds of USA security personnel at Guantanamo as they interrogate a suspected key player in the World Trace Center attacks. The first is that if he did not do the crime of which he is accused, he would have done it if he had the chance. The second is that even if he did not do it, his friends did and taking revenge on him is better than nothing. Director Kevin MacDonald does a good job leading us through the morass of political motivations that lead to an apparently innocent man being held behind bars and tortured for 14 years.

The scenes of the inside of the prison are crucial even if they add nothing to the genre. “Camp X-Ray” did it better, without the repeated amplified and sharpened clanging of iron doors. After the first dozen or so clangings and crashings, we get the idea. After all, there had to be some audio dimension to the imprisonment other than the simple cruelty of solitary confinement.

Tahar Rahim plays Mohamedou Ould Slahi, a man arrested for having connections to the Islamic militants responsible for the World Trade Center attacks. The prosecution of his complicity came up empty so we will never know what he knew if anything. However, in his book “Guantanamo Diary” (edited by Larry Siems), he apparently went into detail about his torture in prison. That is shown in the most graphic clarity possible given that there will never be a recounting, let alone an apology, by the US government.

Jodie Foster plays the elite, buttoned down attorney who takes on the case pro bono. Her attributes are not unlike those of FBI agent Clarice Starling, upright and disciplined. Unfortunately, she does not have Anthony Hopkins to resonate with, or perhaps reverberate against. She has Mohamedou, who is not that much different than her character Nancy Hollander. He went to Germany on an electrical engineering scholarship and she overcame the odds to excel in what was once a man’s profession.

The Hannibal Lecter character is left to be played by the military personnel at Guantanamo, with mixed results. Benedict Cumberbatch’s work as military prosecuting attorney Stuart Couch comes across as more of a narration of the government’s ill-guided mission than an enactment of living, breathing wickedness. Fair enough, as he was caught up in the system like everyone else; the story did not want Jack Nicholson from “A Few Good Men.”

The value of the film lies in the exposure of the interrogation methods used to coerce the partial admissions of guilt from the prisoner, techniques which are reprehensible, ineffective and, in the minds of many, patently illegal. A valuable message diluted by the fact that we have already heard it. A valuable lesson that does not necessarily translate into an entertaining film.

Director MacDonald is able to leverage his work on the compelling “Last King of Scotland,” using a sparse soundtrack and political gravitas to beam evil from the screen. We get the picture and it is an important one. Nonetheless the movie comes off as more a vital documentary than a stirring retelling.


The Mauritanian is now available on Blu-Ray, DVD, VOD & Digital.