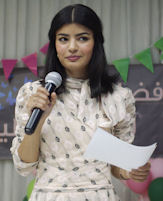 The US wide-release of “The Perfect Candidate” has me worried. How can a drama about female repression in Saudi Arabia, filmed and produced in Saudi Arabia, notorious for said repression, pass a Saudi script censor and be submitted as the country’s Academy Award submission for best foreign film? Will there be a delayed and brutal reckoning for the director, crew and cast at some point?

The film features the lovely Mila Al Zahrani, who plays Maryam, the only doctor at the only medical clinic in the area. Frustratingly, the entrance road is routinely flooded. Self-confident and aspiring to work at a grander hospital, she arranges to attend a conference in Bahrain where there will be interview opportunities for doctors in bigger Saudi hospitals and cities.

But Maryam ends up detained at the Saudi airport because she doesn’t have a document allowing her to travel without a male guardian.

Why would Saudi Arabia want to expose this misogynistic policy, the male guardianship system (mgs), to the western world? Plus, why would it not only allow but encourage a film critiquing it?

Human Rights Watch states: “While other countries in the Middle East have elements of the male guardianship system, Saudi Arabia’s is the by far the most draconian in the extent of its laws and regulations, as well as the authorities’ efforts to apply them” (2019).

The twist to “The Perfect Candidate” occurs when Maryam seeks out a cousin in a government position to process her papers so she can get on her flight to Bahrain. The gate-keeper for her relative explains that only people who have signed up to run for the Municipal Council can be seen by this relative today. In exasperation. Maryam signs the application to become a candidate which allows her entrance to her cousin’s office. However, he still won’t move papers to allow her to make her flight.

In her frustration and anger, Maryam considers the application and begins her campaign. This exposes a wider set of rules, regulations, and traditions related to the Saudi male guardian system which would be comical if they weren’t so true.

Juxtaposed to Maryam’s resistance to customs is her recently widowed father’s Saudi tour with his traditional, and also fabulous, oud band. In some areas police protection is provided for them because “some radicals don’t like music.”

Selected by the Saudi Academy Awards Committee, an independent group of filmmakers and cinema figures chaired by a local director, “The Perfect Candidate” was submitted as Saudi Arabia’s 2019 entry (just months after the October, 2018 Saudi assassination of Jamal Khashoggi) for the Best Foreign Film Oscar prize.

“The Perfect Candidate,” a courageous film revealing ways in which the Saudi male guardianship system may be challenged, opens on May 14, 2021, in US theaters.