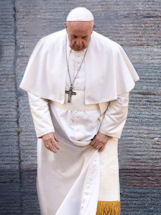 “Go into the world and preach the gospel … and if necessary, use words.” — St. Francis Assisi.” This is the quote, on a black background, that begins and reverberates throughout “Francesco.”

Despite Pope Francis’s announcement that he was naming himself after Assisi because of his embrace of the poor, other things about Assisi also resonate in the Pope’s papacy, including his concern for nature and all humans. But most dramatically, as implied in the quote, it’s more what you do than what you say that counts.

Award-winning director Evgeny Afineevsky documents Pope Francis’s papacy since his election as Pope in 2013 with extraordinary interview access during 2020, the year of COVID.

Sitting in a chair in an empty chamber, Pope Francis, known as Papa Francesco in Italian, says the defining crisis of the last 100 years is genocide, beginning with the Armenian extermination, 1915-17, through to the current Rohingya massacre beginning in 2017.

He also lists the other crises of our times, including climate change fueled by environmental abuse, refugees and immigration, and sexual abuse, both through priestly malfeasance and exclusion of gays in the church.

The latter issue, pointedly sexual abuse by priests, snakes through Afineevsky’s film like a dark shadow of guilt that works to erode all the good the church intends. How the pope initially responded and how, through revelation, his response today has evolved is both instructional and inspirational.

Pope Francis makes contact with each crisis he examines. Whether it is a visit to the Philippines after a massive typhoon in 2015 to explore climate change and indicators of human complicity, or an intervention on behalf of three Islamic refugee families from Syria, Pope Francis is involved. He walks the talk.

Pope Francis includes everyone as God’s children. He worships in a mosque, embraces Jews with tears, and sits at council with Buddhists. He visits heads of state, including Aung San Suu Kyi and the Myanmar government to try to influence peace with the Rohingya. Afterwards he travels to Bangladesh to encourage Prime Minister Sheik Hasina in her support of the refugees and then he goes to the muddy camps to hear the stories of the suffering Rohingya.

This doc had the potential for greatness, but frankly its director and editor are so overwhelmed by all that Pope Francis has done that they cannot cull a storyline from their footage. The most religious will be checking their watches and the most devout will be drifting asleep. The depressing soundtrack dirge leaves us feeling the burden of pain and suffering of Pope Francis, without an uplift or significant hope. This pope dances, but in their perceived agency to document Pope Francis’s work, that was left out.

Tags: Evgeny Afineevsky
Posted 06 May 2021 by Bev Questad in Reviews