Screened at the 2013 New York Film Festival, Rithy Panh’s documentary is a scathing and heart rending tale of the Khmer Rouge campaign of terror. Using childlike clay figures, the film maker is able to put the audience into the place of a child who is incapable of understanding what is happening around him. Of course, nobody could understand the seeming baseless terror and blood shed that was the mark of the Khmer pogrom between 1975 and 1979.

The film starts in 1977. Phnom Penh is deserted and there are two million people on the road. The city corrupts. It is abandoned as a symbol of decadent waste and its life blood drained into the bloody roads and disease ridden swamps of the killing fields. This is the missing picture; the missing part of film maker Panh’s life that can never be recovered.

The campaign of political cleansing starts with the educated and the middle and upper class professionals. These are the Cambodian citizens that the government has identified as being the worst of the worst. They have been chosen for retraining and reeducation. Those who do not learn do not eat. All clothing, possessions and even names are gone. In their place is the faceless black uniform of the society without individuals. The black tops and bottoms are their only clothes. Their only possession is a spoon. Possession of anything else is punishable by a slow death through starvation at hard labor.

Food becomes the only medium of transaction in the new economy of mental and spiritual rapine. If one does not eat, and one’s family does not eat, the citizen becomes more pliable and more willing to learn by the day.

Cambodia’s official submission of Cambodia to the Oscars’ 2014 best foreign language film category, Panh brings a realism to the incomprehensible misery of a nation through a combination of the all-too-real and the childishly imaginary. These juxtaposed images interspersed with commentary (by Christophe Bataille) take the audience through one of the most realistic first hand experiences of murder and mayhem ever seen on screen. 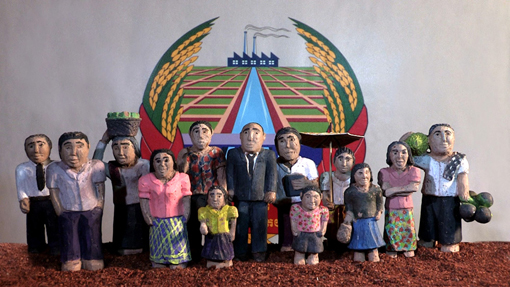 You may have seen unforgettable films before, but it is the feeling of terror, as much as the images themselves, which stay with the viewer when the credits finish and the lights go on. Could this happen to anybody? Could it happen here (or anywhere?).

In a sea of shock and disbelief, the new order spawns megaprojects of the most astonishing execution. Uncountable thousands of former college professors, scientists, business persons and intellectuals form endless conveyor belts of people, each one hauling a precious bucket of dirt to form their brick in the wall against capitalism. Even the cars of the West are butchered; up-ended with their tires removed they are transformed into pumps for the people’s rice paddies. Too bad the workers never see the rice of the paddies, which makes its way to places and people unknown. Only Pol Pot and his cronies appear well fed.

The army and politicians become the new upper class. To be lucky enough to carry a gun means a status that allows the actual raising of a family. The soldiers’ children are taught trades. There are no engineers or scientists, but to be taught to run power lines or connect telephones is a privilege. But even the soldiers and top politicians know that this status is only as firm as the last impression they made with someone higher up. The surest way to stay on top is the most irrational; denounce those below. To a government that thrives on pain, only the creation of that bitter drug feeds the addiction.

Seeming to follow a pattern that is as universal as it is absurd; the Khmer regime documented its own murderous and inhuman activities with its own cinematographers. In the end, the camera operator for most of the archival footage in this film was killed after it was determined that he had documented too much. The footage was recovered only by a miracle, or perhaps through the inevitable fate decreeing that the truth will find a way out. The disintegrating celluloid was painstakingly restored as much as it could be, with much of the footage lost forever through simple deterioration over time. Rithy Panh’s first-hand narrative, he was a teenager when the Khmer took over, echo the missing pieces of the rotted film. Parts of his life that may be gone forever, lost to the chaos of a social order gone badly awry.

Perhaps the clay figures, acting out the saddest moments of despair and loss imaginable, are his way of revisiting the childhood he never had. Perhaps these pictures of death are his way of inviting the audience to share his celebration of life. It is a celebration few of his contemporaries can share.