Perhaps it is because his past efforts were more Rabelaisian than revelatory, Mads Brugger’s latest will be taken with a grain of salt – even after he rightfully and correctly declares “Everything is Real.” The story that has Mads on the cusp of buying intermediate range ICBMs tipped with thermobaric warheads is real. It is also entirely his own.

The film is being screened at the 2021 DOC NYC film festival, produced and presented by IFC Center, which runs in-person from Nov. 10 to 18 at IFC Center, SVA Theatre and Cinépolis Chelsea and continues online until Nov. 28.

To say the deal represented the participation and support of North Korea’s ruling elite is far fetched. To say that this story sheds light on the inner workings of the secret state is more Mr. Brugger’s dream than reality. Putting that aside, what a wonderful yarn. Gutsy, too. In his first exposé, he bought an ambassadorship from the country of Liberia, not to smuggle gems as he implied to the subjects of his joke, instead to show that anybody with chutzpah and money could get official cover for international crime. That idea worked because buying an ambassadorship is inherently less harmful than buying an intercontinental missile. The perpetrators were careless. Also, they are pussycats compared to North Korea, the country where ministers failing to clap loud enough at a presidential speech are executed with anti-aircraft cannons.

Brugger invented “an international man of mystery” (his own words), an oil billionaire who dabbled in arms trading and covert international finance. Jim Latrache-Qvortrup, an actor, assumed the name of Mr. James. He joined Ulrich Larsen, who had already infiltrated the hilarious and completely real Korean Friendship Association (KFA), headed by president Alejandro Cao de Benós de Les y Pérez. Kudos are due for the insight into the slapstick amateur propaganda of the KFA and the lame brained leadership of Mr. Perez. However, this is not a huge revelation.

His two partners encapsulate the feeling of the whole film. They have a marvelous combination of innocence, absurdity and dedication if you dig deep enough. The stilted lines and straight-faced mugging beg the viewer to assume this is a ridiculous hoax. Unfortunately, there is reason to believe the North Korean authorities thought exactly that. After all, they had nothing to lose by playing along. Knowledge is power and they had everything to gain and little to lose.

If the movie exposed the regime to be selling weapons to any hooligan who ordered them and dabbling in addictive drugs for which the USA lusts, is that a huge surprise? It is doubtful it is a surprise to USA intelligence. If it enlightens the public, so much the better, but NK has so many double-secret sanctions already the US public is tired of hearing it. 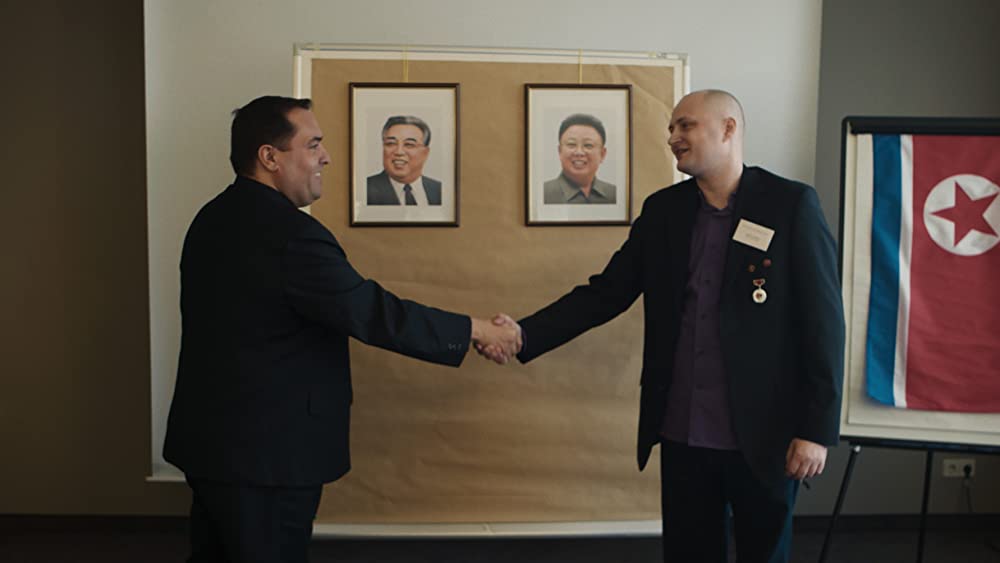 
Some of Mr. Larsen’s lines pique the curiosity as much as they tickle the funny bone, such as his statement that North Koreans smell bad. Further explanation is that they smell like alcohol. To blend in, he develops a spray to apply to himself to smell like they do. Eau d’ whisky? Give the formula to the Kardashians and maybe they will run with it. One of the most creative movie-makers out there, Mr. Brugger is in danger of going the way of Michael Moore once he runs out of ammunition. Enjoy his exploits while you can.