Review: Being the Ricardos 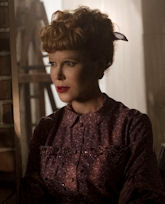 Aaron Sorkin, writer/director beloved for “West Wing,” gets two rotten apples from me for his recent film, “Being the Ricardos.” Admittedly his mission was ambitious, taking us into one panicked week of artistic conflict, political crisis and personal betrayal in the lives of Dezi Arnaz (Javier Bardem) and Lucille Ball (Nicole Kidman) and their “I Love Lucy” show.

The first controversy has been over casting. It takes more than hour and a half to accept Kidman as Ball and maybe some of us never get to that with Javier Bardem as Dezi. When Kidman is allowed to use the signature gravelly voice, and the hair and make-up team is directed to transform her into Lucy for a scene in the show, she is great.

Unfortunately, Sorkin made it very clear to both Kidman and Bardem that he was “not looking for a physical or vocal impersonation of these people.” Instead, he was focused on telling their story. This hubris of the writer/director will keep “Being the Ricardos” from the awards it could have garnered.

The second controversy regards how much to include in the film. Sorkin is a genius and his “West Wing” TV series made him a popular leading progressive. His signature style is to pack in a ton of information with several plot strands. But in “Being the Ricardos,” he went overboard. Somewhere, with the flashbacks and I think flash forwards, there is some confusion about what happened when.

What Sorkin does hit square on is the genius of Lucille Ball. Her insight, comedic instinct and personal power eclipse a room and everyone in it. Sorkin, with the approval of Ball’s children, Lucie Arnaz and Desi Arnaz, shows how this strength also compromised her marriage, her family, and her work relationships.

As for acting, Nina Arianda and J.K. Simmons, both stars of the last “Goliath” episode, do not disappoint. They play Vivian Vance and William Frawley and we love them for that transformation, taking us so clearly back to the “I Love Lucy” days.

Sorkin disregarded the love affair America had with the characters in this iconic weekly sitcom that reflected, in zany ways, our own fragile egos, our early fight for gender equality and our need for a good laugh. To not let Kidman and Bardem personify them, apart from the sitcom scenes, may diminish our enjoyment, but fills some gaps between what was real and what was fantasy.