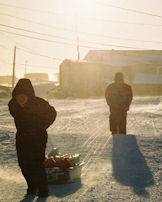 As the permafrost continues to thaw due to climate change, the Alaskan Yup’ik people in Newtok have created boardwalks and bulkheads to adapt to the dissolving ground and steadily encroaching river and sea waters. Their despair and poverty grow as their land fades away.

Newtok, some 600 miles south of the Arctic Circle, has been a slowly sinking native-American community in Alaska. It is one of the first casualties of global warming and climate change. What happens when land erodes away? Who will pay for relocation? Who is responsible?

Andrew Burton and Michael Smith, the “Newtok” filmmakers, warn that Newtok is one of dozens of places in the US, including more than 30 villages in Alaska, that need to relocate due to climate change. Globally, an estimated 1.4 billion people will have to move due to rising seas by 2060.”

Burton and Smith worked on filming “Newtok” for six years, including filming the community for 300 days to create this haunting documentary about one of the first mainland areas in the world to be claimed by global warming. Like the canary in the coal mine, Newtok is an early victim of climate change. Back in 1996 the inhabitants voted to move to solid ground. Burton and Smith capture how that vote has panned out.

Luckily, there are home movies from Tom John, the village council administrator who went missing in 2017, showing life in Newtok before the melting tundra became such a problem. There were village celebrations and an egg race on dry ground for smiling children.

Tom John, in Burton and Smith’s early filming, explains that “95% of our diet is what we harvest and gather: fish, fruits, meat.” Unfortunately, this self-sufficient lifestyle has not expanded to money-making commerce able to sustain the village. There is no commercial marketplace that can support the needed electrical, water, sewer and garbage services. One mother must leave her children with her own parents to seek a job in Anchorage. She explains to her daughter that they need money for clothing and food. Their pain and grief is wrenching.

Tangental to the film are questions about responsibility. As land becomes more and more affected by climate change, what is the role of government? When the lands belong to an Indian Nation, then what? And what if the US government pushed these people to these barely inhabitable properties in the first place? How much does relocation cost? 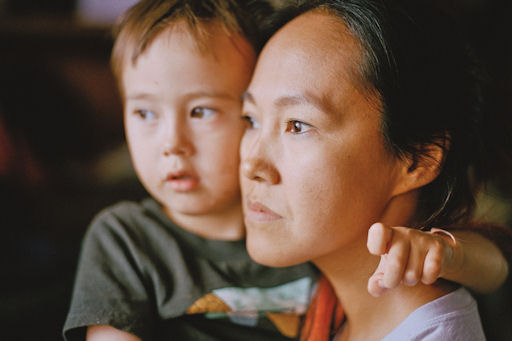 In its debut, “Newtok” was shown in November at the Doc NYC Film Festival and will be shown Dec. 11 at the Anchorage International Film Festival.