Review: The Other Lamb 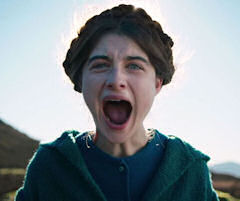 The opening scenes of the concubine-like quarters of the 15 or so women under the control of Shepherd tell the whole story. Do not try to impose any kind of literal, rational interpretation on this movie. The message is allegorical, at best. At worst, it is exploitation; a revenge thriller short of thrills and a horror flick short of being horrible.

Even so, there is something fascinating about watching this group of dismally vacuous soles wonder through the wilderness. Rousted out of their leaky roof encampment by establishment gendarmes they wonder through sharply inhospitable badlands, rocks leading to brush, leading to desert and finally, hilariously, through a stump-mottled clear-cut. Standing in the middle of dead and rotting second growth tree corpses, they begin to lose faith.

Even the Mormons had covered wagons and horses. These guys are completely on foot, carrying their young. Yes, people somewhere in the world do that, but they are running for their lives ahead of a military assault, not stumbling through wastelands to satisfy their lone male’s fondness for underage canoodling.

The viewer hopes Shepard will get it, and yeoman-like Michael Huisman (swallowing his pride) does nothing to dilute that blood lust, if little to amplify it. He comes across as mentally dim rather than deliciously psychotic; Monty Python’s French knight farting in your general direction or Tom Hanks with a mean streak. When he goes off the deep end, it is not as surprising as it should be. His sexual fetishes are gross, but not horror-film gross. More like Andy Warhol experimental film gross.

Resonating with the audience, teen Selah (Raffey Cassidy) and retired concubine Sarah (Denise Gough) have a good chemistry as nubile next victim and the gal who knows. Why the gal who knows did not off Shep the slug years ago is a mystery. Or maybe not, maybe it is the way things are in the real world and we shut it out. Director Malgorzata Szumowska and writer C.S. McMullen should be given the benefit of the doubt on that.

The film makers tell the story with a series of well-edited flash-forwards and flash-backs, nice if you like that kind of thing. The shifts in time tell most of the story, the problem being not enough story to tell. The story of how fifteen people lost their minds and came under the control of an idiot would be more interesting than what eventually happened to the idiot.

Lamb’s blood is contrasted with menstrual blood. There is something there, as in Stephen King’s “Carrie,” but it is best used once and left to stew in the audience’ minds. After a while, the blood gets cloying instead of scary. The dreadful string soundtrack marches a funeral through your living room in time with a flashing slide show of death and corruption.

When the devil they knew appears to be replaced by a devil they do not know, we are left to imagine. Fair enough, but that story would have been better than the one that sucked up the screen time. Maybe there is a sequel in the works. Do not hold your breath. 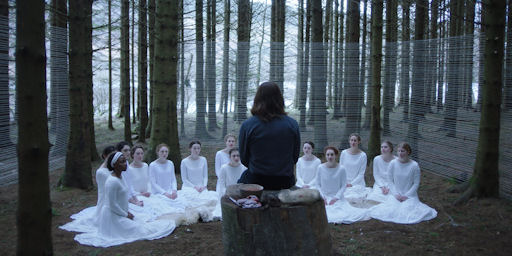