Review: To the Arctic 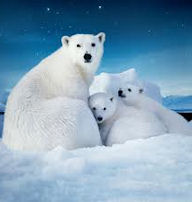 The headlining event for the kick-off to the 2012 Oregon Museum of Science and Industry (OMSI) Film Festival was the Oregon premiere of “To the Arctic,” the story of a gentle polar bear mother and her playful twin cubs.

Florian Schulz, an extreme location photographer (he even scubas under icebergs in the Arctic), was on location with the production crew for five months. He gave a multi-media presentation showing his work as an Arctic photographer camping in the freezing Arctic with his Mexican sun-loving wife.

Schulz explained that the purpose behind “To the Arctic,” filmed 8 degrees from the north pole in the Norwegian Svalbard archipelago, was to entertain, educate and inspire audiences to work for conservation advocacy. He shows his experience with the IMAX crew, leaving off as a hungry mammoth male polar beer chases the film’s focus, a frantic mother bear and her cubs, jumping across little melting icebergs.

When seals are hard to find, as they are as the ice flows dwindle, the next tasty thing is a polar bear cub.

With great waterfalls spraying off ice cliffs, Meryl Streep’s gentle voice announces that there are truly few wild places left. She explains that 25% of the ice has receded since 1980 and reports that scientists predict, if nothing is done, all the ice will be gone by 2050. 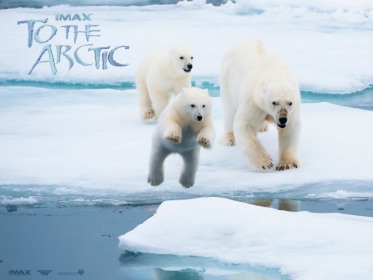 Magically, the filmmakers weave a story about the polar beer mother and her twin cubs into the film. For five days she allows them to film their play, sleep, hunt, nourishment and danger. The audience understands that as the temperatures are rising, as the ice flows decrease and as food sources become more and more scarce, the life of this tight family unit is at risk.

As Schulz showed in his background talk, a hungry male polar bear comes onto the scene. Like other males in a similar predicament, he is seeking young cubs to satisfy his hunger.

We have come to love the caring mother and her little family, so we immediately understand the entire chain effect of global warming that creates this moment of crisis.

At the closing Q & A session with Schulz, a student in the audience asked: If you were asked to go on this trip again, what is one thing you didn’t take that you would on a second trip?

Without hesitation, Schulz answered that he would take Barak Obama so that he could appreciate and understand the fragility of the area and not support oil drilling in the Arctic. Schulz explained that there is no technology available to clean an oil spill under ice. In addition, there is no technology — period — within 1,000 miles to attempt a clean-up anywhere in the frozen north.

This entire glorious film, with the incomparable Streep narrating, is all set to creatively expressed fabulous music by Paul McCartney. The entire experience is like setting down to a chocolate dinner – so heavenly delectable you never want it to end.