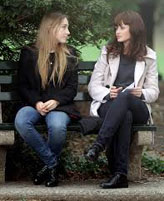 Anybody who watched 2009’s astounding “Precious” knows that when screenwriter Geoffrey Fletcher digs into the far corners of dysfunctional women’s minds, he comes up with eye-opening realities. In “Violet & Daisy,” he not only writes the screenplay, which is on the far side of other-worldly, but he directs Saoirse Ronan in one of the best, and creepiest, roles of her life.

This story is so perfectly suited to Ronan’s far-away look that one might think he wrote the film just for her. That may be the case, but landing James Gandolfini as the gangster at the end of the line was the daily double in this horse race. The awesome bulk and gravitas of Tony Soprano simply falls into the bottomless blue eyes of Ronan’s Daisy, teenage killer.

Daisy and Violet (Alexis Bledel, “Gilmore Girls”) are professional hit-women. Although only teenagers, they shoot like Jesse James, Wyatt Earp and Bruce Willis combined. In the movie’s opening scenes, they shoot about two dozen hardened mobsters without sustaining a scratch. All in a day’s work. But there must be another day’s work to follow. Barbie Sunday is coming soon and Barbie Sunday dresses must be purchased. Therefore, it is back to work for the industrious twosome.

The saving grace of this tall tale bullet fest is the firm establishment of fantasy in the first 10 minutes screen time. The audience is given clear direction that there is nothing herein that is to be taken as a literal truth. This story is a philosophical discussion of one’s relative place in the scheme of things, of one’s duty to oneself, to one’s friends and to the honorable and professional performance of one’s assigned duties.

Daisy and Violet are just doing their jobs, as required to get the Barbie dresses, and washed up gangster Michael (Gandolfini) is doing his. D and V kill, and M gets killed. That is the deal. The past, present and the future. 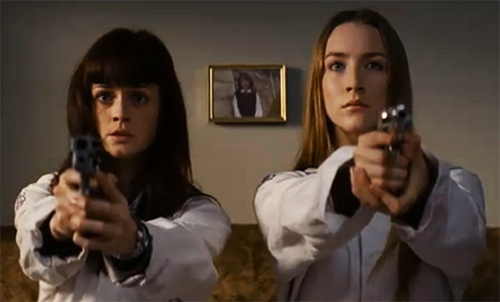 As it turns out (surprise!), Michael has been expecting them. He knows his time has come and it is only a question of who does it first. He would rather it be the two girls who blow his brains out than the rapidly approaching group of four numbskull thugs who will otherwise do the job. The girls are the good way to go, because … well, just because. The numbskulls are the wrong way to go, because … well, because they once locked Violet into a dumpster and may or may not have done other unspeakable things to her. The other unspeakable things are irrelevant, as it turns out, because the disgrace and dishonor of being locked in the dumpster was worse than death. They are bad people. Even worse, they are unprofessional, hate girls and probably, hate Barbie dresses.

Making things even more difficult, the girls run out of bullets before the job is done and Violet is forced to confront her fears by going to the hardware store down the street to buy more (Daisy, “I should go.” Violet, “No, you are underage and I have ID”). Upon her return she finds that Daisy may have been less than truthful about her role in their multiple assassinations. How do you know who your true friends are?

Believe it or not, Saoirse Ronan and James Gandolfini develop a huge on-screen chemistry. Unfortunately they are pretty much the whole film. This is My Dinner With Andre remade as My Dinner With Death. Funny shout-outs to gansta’ classics such as Reservoir Dogs as the four thugs stride down the street having conversations about which side of your mouth the gum should be on, or something. Pulp-fictiony scenes of piling corpses into the bathtub (cleanliness is next to godliness) only to discover that you need their guns and so have to dig through the blood soaked pile to retrieve them. Advice from the fairy godmother with the sniper rifle, “Don’t screw this up.”

What’s a girl to do?

Suitably greasy performance by an extraordinarily crepuscular Danny Trejo, as Russ, the girls’ contract agent. Great dark and off kilter cinematography by Vanja Cernjul (Nurse Jackie and 30 Rock). Reunion with Precious editor Joe Klotz. Be there or be square.