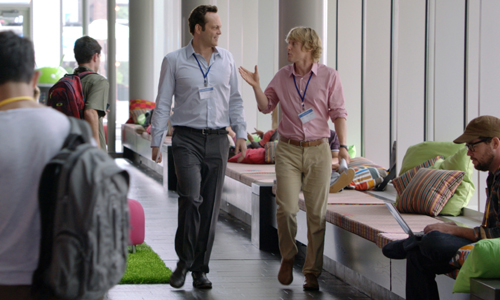 The comedic duo from 2005’s “Wedding Crashers” are back together on the big screen, as Vince Vaughn and Owen Wilson re-team in director Shawn Levy’s “The Internship.”

Two out-of-date watch salesmen Nick (Owen Wilson) and Billy (Vince Vaughn), who are down on their luck after losing their jobs because they have become obsolete in a world where everyone uses cell phones to tell the time. In an act of desperation to find a niche in the new all digital world, the two apply for a summer internship — under the guise of college students — at Google headquarters in Silicon Valley. However, only a few positions will be offered to the highest ranking internship team at the end of the summer.

Saddled with being the “old guys,” they end up on the leftover team full of misfits and have to fight to adapt to this new technological world. With an overseer that is oppressively critical of Nick and Billy, they have more to prove than anyone else there. Out of their element, the Nick and Billy will struggle just to keep up, but maybe all of their world experience will help teach these tech-savvy kids to interact with the world around them instead of just a computer monitor.

That is a most basic description of “The Internship,” but that is precisely what you get, a very basic comedy. Yes, there are a few funny gags, but we are stuck with the same formula we have seen Vaughn and Wilson do in the past. The tongue-in-cheek shtick they perfected in “Wedding Crashers” doesn’t bring as many laughs this time around.

Yes, there are some quirky characters and there is even some awkward romance, but in the end it’s nothing we haven’t seen before. Some of the best moments come from the large cast of supporting characters who are full of outrageous whimsical characters, with flaws that they will eventually overcome or benefit from them in the end.

Some of my favorite side characters were played by Dylan O’Brien, Josh Brener, Tobit Raphael, Tiya Sircar and Josh Gad, as they have the most interaction with our main duo throughout the film. Rose Byrne and Aasif Mandvi have notable roles in the film as well, but not nearly enough screen time to make an impact. If you’re looking for an easy-going film that is light-hearted in tone, then this film might be for you.

My biggest takeaway from “the Internship” is that I want to work at Google … honestly! A free coffee and snack bar, ping pong tables, sleeping pods and bicycles for transportation seems like heaven for any employee. I really should get more into the technical and programming side of computers if it can get me a job there. Besides the obvious chemistry between Wilson and Vaughn, I believe that the awesome environment and how uniquely it runs is like a commercial for the company.

The film is sure to bring in fans of the actors, but I doubt more than the loyal few will be impressed with the movie and the rest will be slightly let down. If you are seeking a truly funny movie to see in theaters, my best suggestion would be to wait another week and go see “This Is the End” as I am hearing great things about how hilariously funny it is, otherwise you might be leaving the theater feeling less than impressed.

“The Internship” – which opens in theaters June 7 – is rated PG-13 for sexuality, crude humor and language. The film also stars Max Minghella, Jessica Szohr, Bruno Amato and a couple of cameos by some comedy giants.