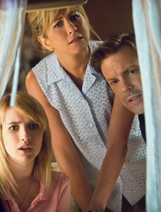 Lately, the comedy genre has been on the decline with generic and unfunny films filling up the screen with unoriginal stories and actors literally doing the least amount possible to get their paycheck. There are always exceptions, of course, and a select few films have broken that barrier and found a magic formula to make audiences laugh all over the world. Can director Rawson Marshall Thurber’s “We’re the Millers” succeed where so many films have failed recently?

When average local pot dealer David Clark (Jason Sudeikis) is robbed of his entire stash of weed and all of his money, he is forced to beg for mercy from his boss, Brad Gurdlinger (Ed Helms). Brad offers him an opportunity to make up for what he’s lost as well as earn some extra money on the side by heading south of the border into Mexico in an oversized RV and bringing it back into the United States.

Since this could result in international drug smuggling charges and prison time, David must come up with a plan to succeed. When he witnesses an all-American family get out of a traffic violation, he has an epiphany. He needs a fake family to help him sneak by border patrol. He hires his neighbor, Rose (Jennifer Aniston), a stripper with a jerk boyfriend, an awkward friendless teenage boy Kenny (Will Poulter) and a young runaway named Casey (Emma Roberts) to pretend to be his fake family.

After quick makeovers to make them look like a J. Crew catalog ad, they are off on the road trip of a lifetime. Of course, there is trouble along the way and things don’t go as planned. Outrageous scenarios and shenanigans ensue and this group of relative strangers must come together as a cohesive unit to survive the trip and accomplish their goal. Will this rag tag group of perfect strangers be able to pull off this quest or will their differences put this mission and their lives in jeopardy?

Not surprisingly, R-rated comedies have ruled the box office in recent years, with “The Hangover,” “Bridesmaids,” “Ted” and “This is the End” being among the most successful in making audiences laugh out loud. Are we as moviegoers becoming so jaded that it takes raunchy humor to satisfy us or is it the originality of these films that made them successful?

I have been really excited for “We’re the Millers” ever since I first started seeing trailers and promotional materials for it. And luckily for us, “We’re the Millers” is just as funny as it looks. Yes, there are places the pace sags a bit and a few unbelievable scenarios, but we don’t go to this type of movie to see believable, we go to have a good time and laugh. The movie starts off by quickly throwing us into the story and not wasting too much time getting things rolling — which is always a plus in any movie, a especially comedy.

With outstanding performances that made the audience roar with laughter, this cast is filled with chemistry and some great character actors. Jason Sudeikis and Jennifer Aniston retain their previous chemistry from working together on 2011’s “Horrible Bosses” and besides the incredible comedic chops of Sudeikis on display, we also get to see some uncommon dramatic acting from him as well.

The biggest surprise of the film for me was the performance from Will Poulter as Kenny, who is constantly used as a punching bag for all of the other characters in the film. His complete and total commitment to the innocence of his character was funny and touching. There are tons of side characters who could easily earn their own spinoff short films because they are so whacky, with Kathryn Hahn, Nick Offerman, Luis Guzmán, Mark L. Young and Ken Marino being the best of these.

During the bloopers in the end credits you get to see some improv skills from some of these actors and it gets you thinking that the film might have been funnier if these talented comedic actors were allowed free reign and able to improve their way through the film. I’m just hoping that we get to see more of these alternates takes on the special features of the Blu-Ray.

Needless to say, this film is not for everyone — such as those easily offended by language, sexual dialogue or some intense brief nudity. It is clearly shooting for a certain demographic. I think the movie clearly succeeds in letting you have a good time and there are laughs throughout.

While the film is banking on the star power of the two main leads to draw in audiences, it is the humor and absolute absurdities of the cast and plot that will make people want to come back for more. 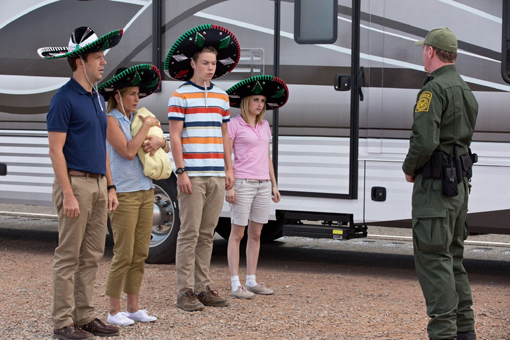