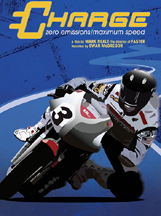 Screened at the 2013 Cinedigm Docurama series, “Charge” is the story of one of sport’s longest and most treasured institutions rediscovering itself. The International Isle of Man TT (Tourist Trophy) Race is the most treasured and dangerous competition in a sport that eats danger for breakfast. Supported by obsessively loyal followers, the finest, fastest, most powerful and most expensive motorcycles in the world are piloted by certifiably insane rides to speeds approaching 200 miles per hour.

If the speed and inhuman power of these bikes is not enough, the TT races are held through the city and suburban streets of the area. The traditional fifteen mile course is traversed 10 times in a race and for most of the riders it will be the toughest 10 laps of their lives. There are few safety provisions of any kind. The course is lined with stone walls, brick buildings, iron lampposts and every other kind of naturally occurring death dealing obstruction imaginable. As of 2009, 240 riders had been killed at the TT races.

This is an odd place to start a new tradition, a tradition of bikes that preserve the environment instead of bikes that kill people. However, on June 12, 2009, that is exactly what happened on the Isle of Man. On that day the world’s first zero-emissions motorcycle grand prix was held on the island. Originally named the Time Trial eXtreme Grand Prix (TTXGP) in 2009 and shorted to the much sexier TT Zero moniker the next year, the races have not only underscored the role of internal combustion engines and the vehicles they power in global warming, but they have brought innovation, experimentation and experimental technology into the race such as has not been seen since it started in 1907.

There is no question that electric powered cycles can go fast. The trick is to make them go fast long enough to finish the one-lap race of slightly less than 38 miles. Average speeds for the course approached 100 miles per hour (MPH) in the first race and exceeded that mark in the most recent (2013) event. Average speeds of the top finalists have increased over 25 percent in the first five years of the race. This is where the excitement lies. As it turns out, connecting a battery to a motor and going fast is not as easy as it sounds. These motors must be the most sophisticated electrically engineered devices in the world. The motor winding and the controls that regulated the electricity running through them require cutting edge circuitry that is evolving very day.

Not that the gas power bikes are not improving as well. But the improvement is that camp is shaving a half gram off a piston weight or adding 500 psi tensile strength to a rod alloy. In the TT Zero races, there are improvements that spectators can really see. And there is heartbreak as well, as bikes run out of power within eyesight of the finish line. In some cases the riders are able to push the bikes over the finish line to at least claim a finish for the race, staying in the competition to race another day.

The trick is to build components, circuitry and controls that can pour the watts to the motors during the straight-aways to building up average speed, but reduce the power in a miserly fashion for the slower corners of the course. Everybody knows that more batteries could solve the endurance problem. But batteries are very heavy, and if the 100 pound bike has to carry 300 pounds of batteries, speed will suffer.

One of the technologies of which the makers of gas bikes would have never dreamed is regenerative breaking. This allows the motor to become a battery charger when it used to slow the bike down, in lieu of, or in combination with, conventional brakes. This regenerative braking ekes out that last few miles of power that spells the difference between victory and defeat for the owners, builders and sponsors of the bikes who can a million dollars into the R&D for a single entry by the time the race begins.

As one would imagine, a sport this technical features some of the most amazing thoroughbred geeks on the planet. The film is a hilarious and rollicking contrast between the meat eating, hell-bent-for-leather gas bike crowd and the high tech computer jocks, obsessed visionaries and new-tech eccentrics of the TT Zero milieu, from India, USA, UK and elsewhere around the world. Amazingly enough, they all seem to get along and coexist on the Isle of Man.

The high tech research is not limited to the racecourse, either. As in automobile racing, many of the technologies that started as cutting edge race course trickery find their way into practical, day-to-day applications for badly needed zero-emissions vehicles. Although regenerative breaking has been used for years in electric cars, better ways to do it are being discovered all the time and it is races like the TT Zero that catalyze those advancements in the yeasty oven of competitive sports.

Zero emissions? Well, not completely, because the electricity to charge the batteries had to be generated somewhere, and most of the world’s power comes from soot and carbon dioxide snorting coal fired power plants. But maybe someday, we will see bike vans pull up to the racecourse covered with solar panels, and the bikes will hook up to the photovoltaic power source the same way cars now fuel up at the local gas station. Now, that would be a more “sustainable” competition!

Although the USA lost out in the first electric motorcycle race in 2009, they came back to win the first (2010) TT Zero race on a MotoCzysz E1 bike concocted in that green hotbed of Portland, Ore. Piloted by American pro gas bike rider Mark Miller, Miller became the first American to win at Man since Dave Roper won the 1984 Historic TT riding a 500cc Matchless. Be there, or be square.