Review: Why Don’t You Just Die! 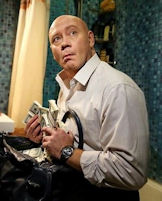 Most splatter flicks take themselves too seriously. It is not the plethora of spouting veins that makes the movie great, it is the deliciously dark humor than goes with it. Throwing a TV set into someone’s face is fun enough, but when the set itself refuses to die, flashing outraged test patterns, broken post-expressionist color bars and slashed and bleeding Rorschach tests into the face of the imminent victim, you know you have got a winner.

Writer/director Kirill Sokolov steals a scene now and then, as well as a couple characters. As obvious as that is, the level of energy that he packs into this tall tale is so unrelentingly crazy and unabashedly graphic that one has no time to judge. Several clever plot twists combined with multiple betrayals and an exceedingly thorough loss of personal dignity and leaves the viewer with only one problem–deciding who should die first.

Vitaliy Khaev plays husband and father Andrey, the nominal target of retribution. His daughter’s boyfriend shows up at the parents’ tiny apartment for their first meeting wearing a Batman T-shirt and carrying a claw hammer. Dad Vitaliy, being a cop, knows something is up. This is the first of a string of subtle idiocies that feed the voracious flames of this film’s dark humor. As the lies build up, the honesty of the mayhem gets better. Everybody wants to kill somebody and nobody seems to care who knows.

Although the exact opposite of a filmic murder mystery, there are a couple nice noir twists. Thug Matvey (Aleksandr Kuznetsov) is seduced by vixen Olya (Evgeniya Kregzhde) into killing her father, the perpetrator of the ultimate wrong of wrongs. Olya is a composite of Uma Thurman’s Mia Wallace and Maria de Medeiros’ Fabienne in “Pulp Fiction,” switching back and forth at will.

There is a good guy in the cast, too. Andrey’s cop buddy breaks the law, and his oath, to do the right thing on a larger stage. He will pay dearly for this sin, as will everybody, as they live out the remainder of their time on earth in a purgatory of carnal retribution. They assault each other, but the original assault was their transgressions against themselves. The movie treads dangerously close to over-used zombie territory, but veers away at the last moment. Although the characters soak up unreal amounts of abuse, they are not born again as undead monsters. They are human, all too human.

Shot almost entirely within the airless confines of a cramped Russian apartment, the daily lives of the protagonists turn into a professional wrestling match. One guesses their lives were always like that, just waiting for this penultimate moment to find their destiny.

Thoroughly good performances from top to bottom stay entertaining for the ninety-nine minute run time. Elena Shevchenko steals the show as bullied wife Tasha, providing the most unexpected plot twist of them all. Writer/director Kirill Sokolov also edits the film and mixes the sound. A synchronous cast and crew makes this movie an exciting portent of things to come.