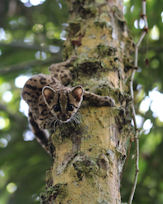 Harry Turner looks at his ocelot protege and kindly says, “We’re wild animals, me and you. We’re wild.”

Though earning many awards and millions of dollars from Amazon, there has been controversy from critics over “Wildcat.” Perhaps some of the rougher comments caused a snub from the Oscars. Though it was on Variety’s early predictive list for Best Documentary, it did not even make the Oscar long list of 15 nominations.

It is clear that “Wildcat” reveals an uncanny relationship between the wild in nature and the troubled in humanity. Harry Turner, the human featured in this film, signed up for a tour of duty in Afghanistan in 2012 when he was 18. He was medically discharged a year later suffering from anxiety, depression and Post-Traumatic Stress Disorder (PTSD).

Camera in hand, he decided to escape far from his native Britain to perhaps evaporate into the far ends of the earth. He landed in a tiny airport with access to the Peruvian Amazon jungle not knowing what language was spoken or what currency was used.

There he began documenting what he saw, exhilarated by the excitement of seeing wild animals up close. Soon he met up with Samantha Zwicker, the head of Hoja Nueva’s Rewilding Center, and began his first project, being a surrogate parent to a newborn ocelot.

The backstory is that Harry documented his experiences in Peru continually as a way to remember everything he saw and did, ironically juxtaposing this with his own existential death ideation. He had no intention of making a documentary until he met wildlife photographerTrevor Frost in the lobby of a hotel. Frost contacted Melissa Lesh, a filmmaker, and they pitched a short film deal to Turner and Zwicker. They had no idea that their work would end up creating a full-length film that would be bought by Amazon for $20 million.

But controversy has been created by critics evaluating this film. The New York Times has referred to it as exploitative and RogerEbert.com expressed concern that Harry’s trauma was being filmed but not treated.

Just because I have a Ph.D. in psychology does not mean that my point of view is any more correct or knowledgeable than the NYT’s or Roger Ebert’s staff. But I did do the research on how the directors dealt with Harry’s evolving mental state.

Documenting mental illness with the active permission and participation of the subject does not have to be “exploitative” or even “troubling.” Instead, the exposure can help take away the self-identified shame of having a mental illness and getting help. Please note, Harry is one of the main recorders and it is through reflecting on his thoughts and feelings that he helps himself overcome his compulsions.

In interviews, Frost notes that it is the accountability to the camera that motivates Harry’s sense of responsibility for himself. In other words, the documentary-making itself, along with his acculturation to the natural environment of the jungle and pairing with the ocelot, became positive interventions in Harry’s ability to live with his demons. Frost also notes that they had regular access to a psychiatrist and counselor to assist the team in helping Harry.

The pivotal focus in “Wildcat” is that Lesh and Frost ended up with a story not just about re-wilding an orphaned ocelot, but about a greater reciprocal relationship – how the human and natural world can work together to heal each other.

Good documentaries are as close as we can get to true, honest reflections of reality. They can help us understand others and ourselves. Zwicker, in interviews, has stated that she knows no one in the field unaffected by trauma or mental illness. The film also explains her own childhood trauma and how her work with animals has created a path for healing her also.

At some point, Harry, who is open about his issues with mental illness, his suicide ideation and self-harm, says about Keanu, the ocelot in his care, “He is saving me, and I am saving him.”

In post-production interviews, Harry explains that with his portion of the Amazon money he has purchased property in Ecuador and established a non-profit called Emerald Arch. His goals include establishing a retreat for people struggling with depression and PTSD. He says, “Emerald Arch doesn’t want just to save rainforests but lives at the same time.”

“Wildcat,” exploring what it means to be wild both in nature and humanity, has exceptional cinematography, an outstanding story, and an emotional impact that beats out the field of feature films this year.