It’s no secret that today is a technologically advanced age. Social media and clouds are the way we share and distribute information. Our phones and tablets are little computers that keep us connected 24-seven, constantly sending and receiving information. What happens though, when a couple decides to make a sex video, and one party of said couple accidentally uploads that video to their Apple iCloud? We find out in “Sex Tape.” 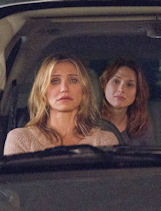 In this trailer for the film, we are treated to some facts and tidbits relating to the film. This type of pop-up/factoid advertising has always worked wonders on me because it piques my interest and I inadvertently get hooked into the film because I go into it with a false sense of knowledge.

It’s one of those great party tricks where one can bust out a fact or two with their friends who may not have seen the pop-up trailer, and as a result one feels more attached to the film. What makes these trailers even funner is when a fact pops up that you actually mentioned previously in your life and you feel oh so smart. I digress, the point is that I am a fan of this type of marketing and am therefore more inclined to pay attention to this type of film.

The premise of the movie is pretty funny, especially if cast properly. And upon glancing at the cast list, I have to say it appears like “Sex Tape” could be extremely funny. Jason Segel is hilarious in my eyes and he’s teaming up with Cameron Diaz again for the lead roles. And who do we have in supporting roles and such? How about Rob Lowe, Jack Black and Ellie Kemper being credited in the film? That excited me for a plethora of reasons. Humor is my basic survival instinct, so I thrive on casts like this.

I have to say, I will be seeing “Sex Tape” even though I wasn’t personally a big fan of “Bad Teacher,” which had both Segel and Diaz and was also directed by Jake Kasdan. The trailers for “Sex Tape” look hilarious and I enjoy basically everyone involved in the film. At first, I was turned off by the whole Apple product placement thing, but at the end of the day everyone knows Apple and it makes for a good gag. I was actually surprised that Apple agreed to be poked fun of.

When I first saw a trailer for the film I was a tad confused about one thing, and that was the way the Apple cloud works, because from my understanding, there are only so many devices that can access information stored in the cloud which is tied to one email address or Apple ID. But ya know I figured, like Segel’s character in the trailer, the cloud is a mystery. And then, low and behold, in the pop-up trailer it is pointed out that only 10 devices can access the information. In theory, this might hinder the plot, but then again, if you are like me, and enjoy a good raunch-com, it’s entirely irrelevant. And for me, that’s what this is, a raunchy comedy that will hopefully make me laugh uncontrollably.