Film shoots can take a lot of time and effort, some upwards of several years. It’s the way things are in the industry, especially in a day and age where, technologically speaking, there’s a smorgasbord of tasks to undertake in post production. Locations, cameras, CGI and varying technicalities lend their hands to the length of any particular shoot. 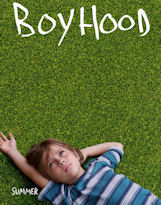 But what about the age of the actors? We briefly in cinematic history have encountered this problem with the “Harry Potter” series, as the actors were aging faster than the movies could be made. That span, however, was over eight feature length films.

Therefore, I was blown away when I heard of a film that was 12 years in the making, not because production was delayed or companies shuffled, rather because the director/screenwriter wanted to tell a story that spans 12 years using the same actors and maintains believability on a physical and emotional level. Now that’s what you call commitment.

“Boyhood” tells the story of a broken family: Mason Jr.; his sister, Samantha; and his divorced parents, Mason and Olivia. We follow Mason Jr. from first grade through 12th grade, examining along the way his relationship with his parents and the choices they make in raising him. This is not groundbreaking storytelling in and of itself, but the genius takes place in the choice that was made to utilize the same actors.

Audiences often forget that actors evolve and expand outside of their work; if they remembered this, then typecasting wouldn’t exist. Characters evolve so rapidly on screen that we often don’t realize how that process works for an actor. In this case, screenwriter and director Richard Linklater went beyond that barrier to create something truly authentic. His characters and his actors had an equal amount of time to grow and discover themselves, which I believe will lend itself to the authenticity of the story. It seems to me that instead of acting or reacting, this group of people are reflecting and interpreting without the use of make-up for aging purposes, or actor swaps to fill in the gaps. I’m completely inspired by this notion and blown away at the thought of how much patience and nurturing a project like this must take.

May of 2002 would mark the start of the journey for cast and crew. The plan of attack was to assemble said cast and crew for a few weeks every year. Linklater had the intention of adapting the story to accommodate whatever the cast was going through. The main goal being to cover as much ground as possible for the story without compromising the integrity of his characters.

So who was this cast that would essentially be signing on to work for this guy for over a decade? Lets start with the parents, who are pretty essential in telling a coming of age story about a boy. The mother, Olivia, is played by Patricia Arquette and I loved this choice from the second I heard about this project. Previously, I never viewed Patricia as a maternal type, I blame my blind judgment on one of my favorite films, “True Love.” Not exactly motherly material. But when I became an avid watcher of the series “Medium” my perception changed for the better. The father, Mason, is being portrayed by Ethan Hawke. I found this to be an interesting choice. Ethan has described the film to be like time-lapse photography of a human being. In various statements, he appears to have a great working relationship with his director — which is always a good thing. Playing Mason Jr.’s sister Samantha is Lorelei Linklater, daughter of the director. Which brings us to the centerpiece of this coming of age story. In the role of Mason Jr., Linklater cast Ellar Coltrane, who has been in films such as “Lone Star State Of Mind” and “Fast Food Nation.” I can only hope that the chemistry between these guys was tolerable to say the least, and that everybody involved got along on a pretty deep level because this sounds like it was extensive and they had to see and work with each other over a long period of time.

The heart of the film is the coming-of-age story. Some may think this theme is played out, but I beg to differ. There are two main reasons coming of age tales can never be overplayed. Each and every one of us on this spinning ball of randomness have come of age. We all have our tales. And secondly, those who are not old enough to have come out the other side yet and those that aren’t even born yet, will eventually come of age as well, and new material will resonate with us who have because we remember and it will hit home with those who are going through it. Innocence is the key.

As we see in these clips, the life through the eyes of children, or the life as seen being reflected onto children, is based in innocence. What sums up the innocent nature of childhood better than a game of hide and seek with your dad and sister? Not much. It’s only the tainted analysis by seasoned persons who could draw from it an ugly underbelly of truth. On the outside, you can’t tell that a broken home is being represented in this clip.

On the other hand, looking at girly magazines is not inherently innocent. I believe it is portrayed in life and in the magazine clip as innocent because young boys do not come from a dark or mysterious place when they do these types of things. They are curious because of lack of experience.

I can’t personally gather a lot from these clips without the aforementioned quest involved behind this picture. I can say that once this inquiring mind delved a bit further, I became hooked and hell-bent on seeing this film. I am anxious to see how 12 years was dwindled down into a feature length film and I’d be very curious to hear the cast and crew speak on their experience.

“Boyhood” has already won a number of film fest awards and is highly praised and rated. I for one will be seeing this film without a doubt in my mind. I would quickly like to drop some kudos in the direction of the director/screenwriter, Mr. Richard Linklater, I tip my hat in your general direction sir, I think this is a brave and interesting task to undertake and I look forward to seeing your film upon its release on July 11 of this year.