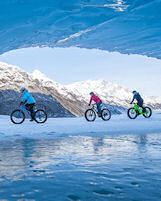 The most exciting, shocking, gorgeously filmed environmental short at Willamette Riverkeeper’s 2019 Wild and Scenic Film Festival is about women athletes snow biking down mountains outside of Valdez, Alaska. There are steep, gaping crevasses, suicidal slippery-edged trails, and at least one hold-your-breath crash.

Never heard of snow biking? I wouldn’t suggest it to your teenager, or anyone else you care about. But I suppose it is a natural progression in Valdez. Before you’ve got a driver’s license you are peddling a bike. With the hottest day of the year around 63°F in July and the coldest running around 10 degrees, how do young kids get around when it snows?

They propel themselves rather safely on flat tired bikes through snow and ice-sheeted streets. It was only inevitable that their bike travel would leach into the surrounding snow-covered mountains.

“Blue” begins with an angelic little four-year-old girl riding her little bike on the frosty Valdez streets, daydreaming of greater adventures. This scenario is juxtaposed to older gals biking the frozen mountains, navigating over rocky protrusions, powder snow, and ice patches. You immediately realize the advantage of biking over skiing – built-in steering!

Nicklas, also known as Woman in the Wild, does a phenomenal job of creating this four-minute visual extravaganza with very cool music, gloriously skillful bikers, and few words. It is an ode to beauty, grace, and living life to its fullest.