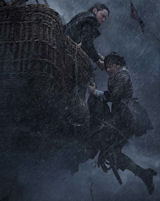 A bit beyond the usual road trip, two balloon adventurers find themselves trapped in a spinning coffin thousands of feet up. Starting off like Natalie Wood and Tony Curtis in “The Great Race,” their gas balloon an idyllic boat on a heavenly pond, they end up in the opposite of what they feared. Instead of going down, they go up, and up and up; out of control to a place where there is no air, no warmth and no way down except to fall.

Pilot Amelia Wren starts off the show with the bald faced flamboyance of Barnum and Bailey, to the consternation of her wannabee partner, scientist James Glaisher. After the first few scenes the shoe is on the other foot as she rolls up her sleeves and turns into the hard boiled risk-taker who is drolly intolerant of apparently useless male baggage. Loosely based on the real record-breaking flight of scientist James Glaisher in 1862, the Wren character replaces the actual male co-pilot, a nod to first woman balloonist Sophie Blanchard who pioneered high altitude exploration until her death in 1819.

Felicity Jones does a star turn in showing she has a tough side to rival anything done by Sigourney Weaver in “Alien,” while Eddie Redmayne goes along for the ride. Although he is nominally the brains of the couple, selling the Academy of Scientists on his prophetic theories of weather prediction, it is pilot Wren who saves the day.

Mixed in with the daring-do is a nice bit of science. There are two problems with an out of control gas balloon. The higher it goes, the higher it wants to go, and there is no oxygen up there. Riders who pass out will ride their balloon up to their deaths by suffocation, and then down to a terminal crash in the middle of nowhere.

In another tight snippet of science, having staved off the one threat the two are headed down when the unthinkable happens. The snow is no longer falling down past them, it is falling up. If this ever happens to you, you will be a thankful you watched this flighty and sometimes scary trip to the far side of planet earth. The two leads share the screen time and each notches up a strong, if procedural, performance. Director Tom Harper doubles down on his strong work with the gritty female lead character in “Wild Rose” to up the ante in this lethal game of woman against nature.

Harper keeps a good team intact as he reunites with cinematographer George Steel from “Wild Rose” to shoot action packed footage of a ship tossed in the clouds like a feather in a typhoon. The sequences of the high altitude gymnastics in the frozen wasteland of near outer space are as good as any gangland war flick out there. Editor Mark Eckersley also stays with the “Wild Rose” team and is crucial to conveying the gathering storm as the two flyers face off with forces that, even now, the world is only beginning to understand. 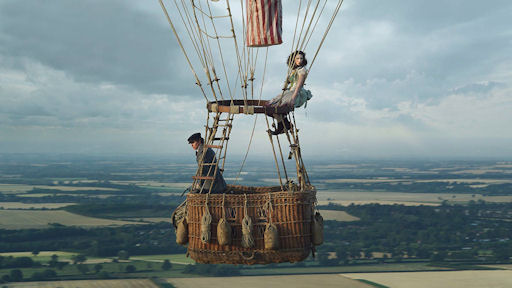