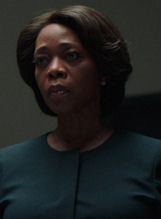 Not a hair out of place, demurely dressed in a tailored suit, calm and in control, the warden supervises a prison each day meticulously confirming that all rules and regulations are followed, especially the ones for executions.

After four years of research, Chinonye Chukwu wrote a script based on stories of real executions, botched executions, and a man who was proven innocent with DNA evidence after 28 years on death row. She also interviewed six different wardens, several corrections officers, and execution officials. She has done her research and the result is a realistic, somber, complex account of what it’s like conducting lethal injections and how it affects the officials involved.

Richard Schiff perfectly inhabits the role of a death row appeal attorney, Marty Lumetta, whom we know would be driving a Tesla instead of his old Chevrolet if he had gone private. His efforts in telling the truth and espousing human rights have adherents and get tv time. He visits the warden and helps this particular case come alive for her.

The accused, Anthony Woods (magnificently played by Aldis Hodge), smashes his head into the wall, wanting some control over how he might die. Pitifully hopeful that his attorney can come through with some magic, Woods learns he has a son and that his girlfriend still loves him. He is handsome and ready to start a new life.

Warden Bernadine Williams (Ms. Alfre Woodward at her very best), the warden, remains graceful on the job, solicitous of each man to be executed, and then stays in each execution room to give the final order. She avoids getting to know the inmates too well, but Woods’s story reaches into her already compromised conscience.

How can she experience any moment of personal happiness when she takes it permanently away from others?

“Clemency” won the 2019 Sundance Grand Jury Prize for an American Drama. Slipping under the wire for Academy Award consideration this year, Woodard’s striking performance may take the Oscar for Best Actress.