If you’ve still got some Teflon pans, dump them immediately at a toxic waste site. That advice is inferred from an exposé on one of the world’s largest and most dangerous chemical companies and their production of perfluorooctanoic acid, aka PFOA, a deadly carcinogen.

Robert Bilott (Mark Ruffalo) can’t help himself as he risks his law career and his marriage in a manic search for the truth in the real-life case of Wilbur Tennant vs DuPont. His obsessive research paired with a moral conscience propels “Dark Waters” like Hercule Poirot in an Agatha Christie mystery.

Based on Bilott’s memoir, this film explains how he became known as DuPont’s worst nightmare.

In 1998, with encouragement from his grandmother and subsequent careful, extensive research, Bilott, an attorney for a firm representing DuPont, one of the world’s most lucrative chemical companies, begins to represent Wilbur Tennant (Bill Camp). A definite conflict of interest ensues as Tennant’s complaint is against DuPont. Though this compromises his firm, Bilott is a relentless bloodhood on a scent.

The mystery begins when Bilott visits Tennant at his farm where he is shown deformed animal parts. “My animals drank this water and now they’re coming up with this.” After he lost 190 calves, Tennat had the Environmental Protection Agency come out. He was never shown their report.

It turns out that the EPA is influenced by the information the chemical companies give them. For example, companies determine their own safety levels for toxic products and those are the levels the EPA likewise tests for and enforces.

To complicate the legal drama, it turns out that Bilott’s wife (Anne Hathaway), a housewife with children, used to be a lawyer herself. Though she understands what her husband faces, her sacrifices to support his obsessive work test her patience.

There are three kinds of people. The ones who want to know the truth, the ones who don’t want to know the truth, and the ones who don’t care. Being that DuPont was a big employer in the area around Parkersburg, West Virginia when the community was confronted with the idea that DuPont had been deliberately dumping toxic, cancer-producing waste into their area, the people were initially disbelievers and inexplicably targeted Bilott as the enemy when they started getting cancers.

“Dark Waters” not only warns about Teflon but the wiles of company-government collusion and the easily manipulated minds of a community. It’s a must-see with fabulous performances by Ruffalo, Tim Robbins, Anne Hathaway, Victor Garber, Bill Pullman and Bill Camp. As a side note, the PFOA produced by DuPont products is “now estimated to be in the blood of virtually every living creature on the planet – including 99 percent of humans.” 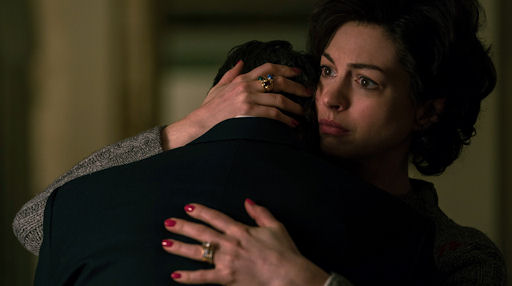