Going in, I was especially excited to watch “Cost of Living” because it starred Brandon Routh of “Superman Returns.” I am a fan of his work and will continue to follow his career wherever he goes. I’ve especially loved his recent guest spots on “Chuck,” as well as “Dylan Dog: Dead of Night.”

I also thought it would be interesting to watch BenDavid Grabinski’s first big break attempt at directing, so I was interested in this project. We started to see posters for “Cost of Living” months ago and heard positive reactions from screenings at conventions, but we never really got any release date information for the masses. Now, the endless wait is over — the short NSFW film is available for all to see online and embedded below.

In short, I found “Cost of Living” to be a mix between “Office Space” and “Ghostbusters,” but with a serious, much darker tone to it. This is definitely a good thing, since I hold both of those movies in high regard.

What I most enjoyed in the film is the way the characters deal with the situation they find themselves in; they keep us occupied and entertained and wanting more when the credits roll. So, what is the situation? The official plot synopsis — “Two young security guards at an unusual corporation have a bad night” — is brief, so I will create my own.

“Cost of Living” follows two security guards who work for a mysterious company that has “constant containment problems” with its experiments. Silas (Brandon Routh) and Jerry (Bret Harrison) are containment team “Echo,” and right off the bat we can see they are no strangers to action and have been doing it for a long time. The alarms go off and they are called into action. We accompany them as they battle monsters through multiple levels of corridors.

In “Cost of Living,” Routh confirms the caliber of an actor he can be and demonstrates to all he is leading-man material. Even though this is a sci-fi film, he gives the conviction to his character that it deserves. He is believable and makes us feel safe while following them along this dangerous stroll through monster-infected passageways. He was definitely an asset to the film and I am sure BenDavid Grabinski feels fortunate to have nabbed him for it. Hopefully, the accumulation of all these smaller projects Routh is working on will continue to keep him in the mainstream until he gets his next big break.

Bret Harrison is not to be undersold either. He carries the movie on his shoulders evenly with Routh. His character has the most lines and bounces off Routh’s character Silas with great chemistry. I would not be surprised to see them work together again in future projects. He also helps to keep this dark movie and Routh’s larger-than-life hero grounded with his comedic relief and normal human concerns about work, pay, buying a home and moving to another state.

I total, Grabinski’s first project is a hit, and should open plenty of doors for him. He has given us a small example of what he could do on a grand scale and I know it will not go unnoticed. The sets, the lighting, the feel and color are all on par with any big budget sci-fi movie or monster-flick. I see “Cost of Living” as his job resume, and now I look forward to watching whatever projects he might be conjecturing in his mind. Of course, there is already talk of a “Cost of Living” sequel or maybe even — fingers crossed — a full-length “Cost of Living” movie. 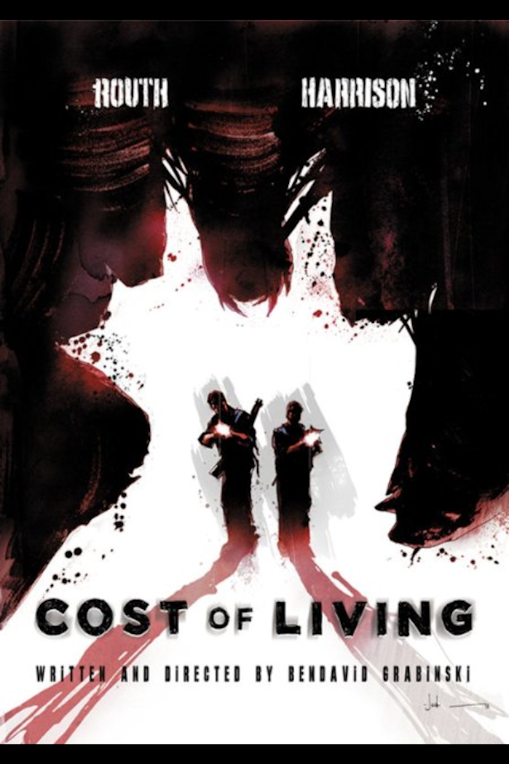