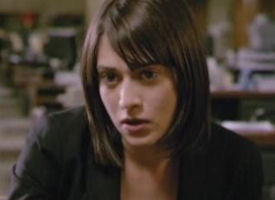 “Successful Alcoholics” is a short film is made up of two contradictory ideas. While it tries to be funny, it also tries to tackle the issue of alcoholism in a serious manner. Whether it is successful or not is a different story.

“Successful Alcoholics” stars comedian T.J. Miller (who is the writer as well) and Lizzy Caplan of “Party Down” fame. The two play an engaged couple who can’t make it through the day without copious amounts of alcohol. As they interact with the rest of the world, it becomes obvious that “successful” is a relative term, even if they do have a nice car.

The biggest criticism I have with “Successful Alcoholics” is that it doesn’t seem to know what stance to take, so it stays at an awkward middle ground. It doesn’t succeed in being particularly poignant or humorous. It is because of this that I feel the film is overall weak. There is no real climax.

After what — one can only assume — is years of destructive behavior and addiction, Lindsay’s rejection of her former lifestyle seems a little forced. However, it was nice to see that she wasn’t totally redeemed by the end of “Successful Alcoholics.” Like anybody who has ever gone through an addiction knows, there are some moments when you desperately want the lifestyle you abandoned back.

As for the rest of the short film, the directing is fairly adept. Sometimes the transition from scene to scene is a little off, but overall the film looks decent. I prefer T.J. Miller as a comedian rather than an actor, but Lizzy Caplan is always a pleasant surprise.

Overall, “Successful Alcoholics” makes a better short than trying to be a feature length.