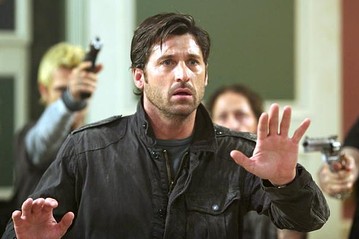 How terrified and scared would you be if you went into your bank, just for a simple deposit or withdrawal, and found yourself stuck in the middle of a robbery? Would it be even worse if a second robbery occurred while the first was taking place? That’s exactly the predicament that customer Tripp (Patrick Dempsey) and cashier Kaitlin (Ashley Judd) find themselves, in the new indie comedy “Flypaper.”

Written by Jon Lucas and Scott Moore (“The Hangover,” “The Hangover: Part 2”) and directed by Rob Minkoff (“The Lion King” and “The Forbidden Kingdom”), “Flypaper” is a movie about a heist that goes wrong in more ways than one.

Check out the trailer and then we can discuss.

OK, so first impression? It looks funny enough and has a very talented cast, but it still seems pretty typical. I’m sure there will be laughs, but not quite sure how many of them.

One observation I had when watching this trailer was that it seemed like Tripp might be involved in the robberies somehow and will look like a hero when trying to intervene. Another thing is that I got a weird feeling like I was watching “Clue” from 1985 when people start falling down dead, apparently murdered by someone among them.

The film premiered at the Sundance Film Festival this year and just got lost in the shuffle because I haven’t even heard of it before. That might be a bad sign, but it might be worth the price of admission just to see this all-star cast in action. Either way, I will probably end up seeing it because I have many family and friends that are big fans of these quirky comedies.