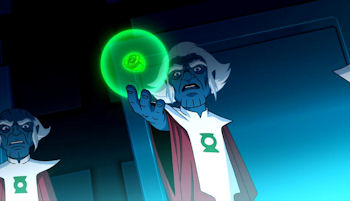 Back when I saw the trailer for “Emerald Knights” and the synopsis, I was actually looking forward to a movie that would basically explain some of the other Lanterns’ stories and more about the Green Lantern Corps.

Before I give you my thoughts of the movie, here is the official description from Warner Home Video:

With stories by acclaimed writers including Geoff Johns, Alan Burnett and Dave Gibbons, this DC Universe Animated Original Movie explores the rich mythology of the Green Lantern universe through six interlocking chapters. While awaiting a battle with Krona, an ancient enemy of the Guardians of the Universe, Earth’s Green Lantern Hal Jordan, Kilowog, Sinestro and other members of the Green Lantern Corps recount their greatest adventures to new recruit Arisia – everything from tales of the first Lantern to the ominous events that led to the Corp’s Blackest Night! The power-packed voice cast includes Nathan Fillion, Jason Isaacs, Elisabeth Moss, Henry Rollins and Arnold Vosloo.

Of the numerous DC Animated Movies that I have seen throughout the years, this one was sadly not one of the best. So let’s get down first to what I liked and disliked with the movie, starting with the positives.

One thing for sure that this movie did better than “Green Lantern: First Flight” was was the casting of the voice of Hal Jordan. Christopher Meloni (the voice of Hal in “First Flight) did OK but Nathan Fillion has won me over as the voice of Green Lantern (like Kevin Conroy did as Batman and Tim Daly as Superman). The design of Hal, combined with Fillion’s voice, was something that I really enjoyed watching and hearing in the movie. Story-wise, I really thought it was nice that he got to be the one who told most of the stories to Arisia. He was a mentor figure to her and his voice certainly makes that image stronger.

Fortunately, Warner Bros. Video managed to make the animation of the movie as amazing as its other DC animated movies. Everything is so well done and the battles … well, I don’t have words enough to describe how good they are. The final 10 minutes of the movie had an especially incredible battles I have seen in animation. I never get enough of seeing those green power rings creating objects and being used in battles like that.

The Focus on Lanterns Such as Abin Sur

There were Lanterns whose stories were entertaining and interesting to see (and some that weren’t). But Abin Sur’s tale was definitely one of the stories that I enjoyed – also, considering that he plays a pretty huge role in the live-action “Green Lantern” (in theaters now), I think it was nice to explore a little more about him.

Too Much Focus on Some of the Lanterns

I’m aware that this was basically the movie’s plot, but sadly it was something I wasn’t pleased with. It was interesting to explore SOME of the Lanterns (Abin Sur, Mogo and Kilowog were especially interesting), but the stories about Avra and Laira didn’t feel as enjoyable as the other three. I expected that out of an 80- to 85-minute movie their back stories would take only half of the time. They should have tried to balance the storytelling so it wouldn’t have gotten boring after a while, which it did at times for me.

OK Movie, But Wrong Time to Release It

While they did explore the Corps, including some of the first and strongest Lanterns, it felt like a movie that should have been released after the live-action movie. If you didn’t know much about the Green Lantern universe heading in, this film would have done little to excite you for the movie. Instead, this would have worked better as an add-on to the movie. If you saw the live-action movie and wanted to explore that universe more in-depth, this would have been a perfect opportunity to do just that.