Thomas Jane returns as The Punisher 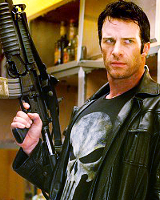 San Diego Comic-Con 2012 is over, but for us online fans, it keeps on giving. In this case, it’s in the form of a short film. More specifically, it’s a unique fan film that comes as a pleasant surprise to many of us.

First off, I would like to say I am a Thomas Jane fan. When I first saw him in “Deep Blue Sea,” I thought to myself he was a diamond in the rough and a future action star. My prophecy came true when I later learned he would star in “The Punisher.”

I loved that movie and wish I was reviewing movies back then. It was dark and gritty and Jane was a great Frank Castle. He was enveloped with bitterness and hate, but he was also disciplined by all his military training. It was a great performance in my opinion. So you can imagine my disappointment when I learned he would not return for the sequel, though after watching the sequel it is possible I understand why he abandoned that project.

Yet, it appears he still loves the character of Frank Castle as much as we do and at SDCC Jane expressed interest in an interview to play the character again if he was asked. This was a pleasant surprise for me, since I thought all hope was lost.

But then, we got an even greater surprise in the form a fan film produced by Jane himself, (embedded below) titled “Dirty Laundry.” It’s a film that drops Jane right back into the world of the Punisher, even though it never implies it. It is ingeniously put together so that it you never really know it’s a Punisher movie, though Jane’s hair is dyed black, and he has the same attitude from his “Punisher” movie. I will warn you, it is extremely violent, and contains heavy profanity.

Here is what Jane had to say about the movie:

I wanted to make a fan film for a character I’ve always loved and believed in – a love letter to Frank Castle & his fans. It was an incredible experience with everyone on the project throwing in their time just for the fun of it. It’s been a blast to be a part of from start to finish — we hope the friends of Frank enjoy watching it as much as we did making it.

This is a fantastic gift to all his Frank Castle fans, as well as an eye-opener for Marvel to bring him back to his iconic role.

Now that so many Marvel movie project are in the works and being rushed into production, a new Punisher movie should strongly be considered in my opinion, and it should star Thomas Jane.

What do you think about the short film?