‘Sinners And Saints’ Premiere Tickets Being Sold for Charity 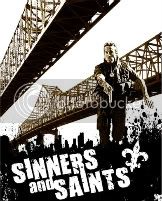 Tickets are being sold to this star-studded event to benefit Common Ground Relief (a non-profit organization focused on rebuilding post-Katrina New Orleans and surrounding areas). The premiere will take place at Arclight Hollywood Cinema in Los Angeles on June 30.

For more information about tickets — which cost $16 in advance (via Paypal) or $20 at the door — go to www.sinnersandsaintsthemovie.com.

Following is the plot description for the movie: In lawless storm ravaged New Orleans, beleaguered Detective Sean Riley is trying to cope with the death of his young son and the abandonment of his wife. Facing a probable suspension from the department, Riley is teamed with a young homicide Detective, Will Ganz, to help solve a series of brutal murders that have plunged the city into a major gang war. The two quickly realize there is something far more sinister going on than either could have ever imagined.

Check out the movie’s trailer below: