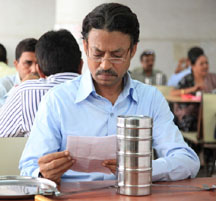 Written and directed by Ritesh Batra, “The Lunchbox” stars Irrfan Khan, Nimrat Kaur and Nakul Vaid. In the film, a mistaken delivery in Mumbai’s famously efficient lunchbox delivery system connects a young housewife to a stranger in the dusk of his life. They build a fantasy world together through notes in the lunchbox. Gradually, this fantasy threatens to overwhelm their reality.

“I am thrilled SPC is on board with ‘The Lunchbox,’” Batra said. “The film is a delicate story with lots of humour and pathos, and SPC is a good home for our film and a great team.”

The deal, negotiated by Michael Weber of The Match Factory, continues Sony Pictures Classics’ long relationship with The Match Factory and Weber, most recently with the films “Fill the Void” and “Wadjda.”