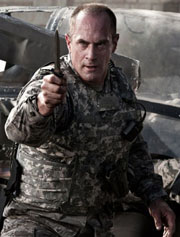 “Man of Steel” is less than one Earth week away from its debut in American theaters and Warner Bros. is not backing down from its promotional campaign. They are in hyper mode as we have seen more material released in the past few weeks than the last six months combined.

On top of new trailers and a 13-minute extended look at the film just a few days ago, we have seen a few clips from the film so far but they have comprised of a lot of talking and no action. Well, you can be excited now for three brand new clips featuring some action between Superman and General Zod on Krypton as well as Earth, and another featuring Zod’s right-hand woman, Faora-Ul. So wait no longer and check out these short clips of our “Man of Steel” in action.

This first clip is an exciting one because it is the first time we are seeing interaction and dialogue in a scene between Jor-El (Russell Crowe) and Zod (Michael Shannon) on Krypton.

We have seen Zod in chains yelling at Jor-El for a brief moment in a trailer, but here we see the full mutiny and betrayal that lead to the rivalry and ultimately exile for Zod and his troops. Interestingly enough, the original source material of the comics, as well as the Richard Donner films of the late ‘70s and early ‘80s, showed the character of Zod as a war lord who was sentenced to abolishment in the Phantom Zone along with his followers, but from what it appears to be in this clip, Zod was already planning on leaving the dying Krypton to establish his race on another planet.

The rivalry and hatred between Jor-El and Zod is the driving force of the character and it plays a major factor into his desire to destroy Superman once he learns who his father was.

This second scene is short but sweet as we see Colonel Nathan Hardy (Christopher Meloni) attempting to stand his ground against Faora-Ul (Antje Traue) and, as you can imagine, an average person going against a super-charged alien life form will not end well.

Thankfully, the human race has our own pre-eminent protector in Superman (Henry Cavill), whose goal is to save everyone. That will be a challenge as he goes against a small army of Zod’s minions and as Faora-Ul says in one of the trailers “For every human you save, we will kill a million more.” The battle appears to be endless for Superman as he has a much harder time trying to defeat the bad Kryptonians as well as saving every human life he possibly can.

The final clip is the best scene released for the film so far as it is the first one to have full-on action.

It starts seemingly at the Kent farm, where Zod has just threatened Clark Kent’s mother Martha (Diane Lane), and our hero has taken it very personally. He takes Zod for a ride through the hay fields and into the adjacent city where there crash land into Main Street.

An interesting part of this clip shows that the holographic helmets they have act as a barrier to the chaotic sights and sounds that quickly overcome Zod as he isn’t used to being unshielded from his new heightened senses. Superman has and tells Zod that his parents are the one who taught him to focus his powers and focus on what he wanted to see and hear. So the pitiful humans he hoped to destroy and conquer have given his opponent the ability to use his extraordinary powers to the highest capacity.

I will be the first to admit that when I heard Zack Snyder would be directing “Man of Steel.” I was skeptical. I loved some of his earlier work, but seeing how some of his latest endeavors have dropped the ball in the story department had me worried. However, I reserved judgment and started making my assessment of the film once I began to see evidence in the footage being released by the studios. I have come to really be excited for the film, as I think that Zack Snyder and the studios have worked together quite closely to keep each other accountable and to make the very best film possible.

“Man of Steel” is a pinnacle turning point for the DC Comics movie universe, which has yet to take the leap to creating a cohesive universe for their characters like Marvel has with its superheroes combining into “The Avengers,” (http://itsjustmovies.com/review-marvels-the-avengers/) last summer’s biggest international and domestic box office hit. The fate of a future Justice League movie, as well as the fate of many upcoming superhero films, relies on “Man of Steel” being as big of a hit as Warner Bros. is hoping it will be. I personally can see this franchise becoming the new “Dark Knight” series and while some may not want to connect these two so closely, I can see how they are similar. With an up-and-coming star like Henry Cavill in the lead role and an outstanding cast around him, the movie is looking to be possibly one of the biggest hits of the year.

Time will tell what the fate of the “Man of Steel” will be, but luckily we only have five more days until we find out. “Man of Steel” flies into theaters June 14.