Stan Lee Reveals His Cameo in ‘The Amazing Spider-Man’

Whenever there is a Marvel Comics movie coming out, there is always one thing that seems very likely to happen — a Stan Lee cameo. We all know that one of the comic book heroes he co-created is coming back to the big screen next year in“The Amazing Spider-Man” and thanks to YouTube user Loss2099, we now know what that cameo will be and it is a huge spoiler … so beware:

“There’s a big battle going on between Spider-Man and The Lizard in a library. I’m the librarian. And I’m stamping books … And I have earphones on and I’m listening to music … And this life-and-death battle is going on behind me … It looks so funny and I look so dumb.” 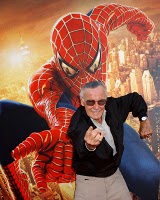 I can totally imagine what that scene would look like and I couldn’t agree more with Lee; this is genius and probably the funniest cameo you will ever see him do.

He also mentioned that another of his works is coming to theaters this year when “X-Men: First Class” hits, but, unfortunately, this news aren’t as good as the previous one – he’s not doing a cameo in the movie. That’s somewhat disappointing – in every cameo he has, Stan Lee is always a pleasure to watch.