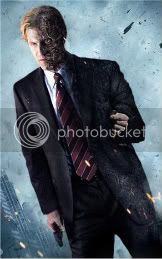 During the past few months, there has been talk all around the internet on the possibility of seeing Harvey Dent (a.k.a Two-Face) again in the next installment of Christopher Nolan’s Batman franchise. Well, folks, it looks like we can stop hoping to see the coin-tossing former district attorney one final time before Nolan leaves the world of Batman.

Recently, MTV talked with Aaron Eckhart about whether we would see him again or not and he discussed a meeting he had with Nolan:

“We found ourselves alone on the beach together on a stormy day and he delivered the news to me,” said Eckhart. “I was heartbroken. But Chris has his reasons and my life must go on.”

“Honestly, it was Heath’s movie to go on,” he added. “We had a great movie. I’m so honored to be a part of that movie. I know Chris has got something in store that is going to blow everybody away.”

Well, I’m not really surprised it turned out this way, but I am a little disappointed. It would have been interesting to see him face off against the caped crusader one more time.

Stay tuned in the coming months on more news about the final story of the caped crusader by Nolan. In the meanwhile, discuss and leave your comments on what you think about Eckhart not doing Two-Face again. Sad or OK with it?