When is “Wes Anderson” too much Wes Anderson? His latest effort, The French Dispatch answers that question: “C’est moi!”

One gets the feeling early on that Anderson, the director of “Moonrise Kingdom,” “The Grand Budapest Hotel” and many others, looked at his cutting room floor and thought: “Here lie the remains of scenes and concepts even I found over the top in the past. Yet somehow, stitched together …”

And so is born “The French Dispatch.” It begins with a death. The death of American ex-patriot editor Arthur Howitzer (Bill Murray). The French Dispatch, headquartered in imaginary Ennui-sur-Blase, France, is a supplement to the fictional American newspaper, Liberty Kansas Evening Star. The supplement is about as far from the likely contents of the rest of this imaginary newspaper as you might imagine. What the yeoman residents of the real Liberty, Kansas, (population 123 in 2010, located a little southeast of Independence, Kansas), might think of the very weird and very French content of their local rag’s supplement, I leave to your imagination. Perhaps the hens can read.

Anyway, it turns out that Mr. Howitzer has a penchant for long-form, obtuse journalism, and encourages that form in his string of writers. Four of their pieces, as imagined being part of a final issue of the Dispatch are:

The Cycling Reporter
Herbsaint Sazerac (Owen Wilson) submits an article about a cycling tour of the town of Ennui (effete boredom), describing various features, both past and present.

Revisions to a Manifesto
Reporter Lucinda Krementz (Francis McDormand) writes of the “Chessboard Revolution,” a revolt of college students in Ennui. She has an affair with a leader of the revolt, Zeffirelli (Timothee Chalamet), and later authors a play about the martyred Zeffirelli.

The Private Dining Room of the Police Commissionaire
Roebuck Wright (Jeffrey Wright), an overly self-satisfied reporter, describes an event from years past in which the Ennui Police Commissioner’s (Mathieu Amalric) son is kidnapped by his chauffeur (Edward Norton), and rescued with the assistance of the police chef (Stephen Park).

This is all done as a tongue-in-cheek (way-in) send-up of The New Yorker magazine, which is also an overly self-satisfied magazine dedicated to telling the world about all things wonderful in New York City. There are even New Yorker-like magazine covers illustrating the various stories.

All of this is accomplished with the exhaustive (and exhausting) detail, the rigid acting style, and the staccato dialogue typical of Anderson films. That is not to say the film is unlovable (fans will cry “More! More!”), or lovable (detractors will comment disgustedly “You lost me at Rushmore”). It is what it is. Fortunately, Anderson’s excellent ensemble cast, know what is expected and delivers it beautifully.

Excellent acting, beautifully imagined if overstuffed sets, a blend of live action and animation (although the live action at times seems more like animation and visa versa) do result in a superior production. In the viewing I attended, only a third of the audience fell asleep – perhaps ennui? 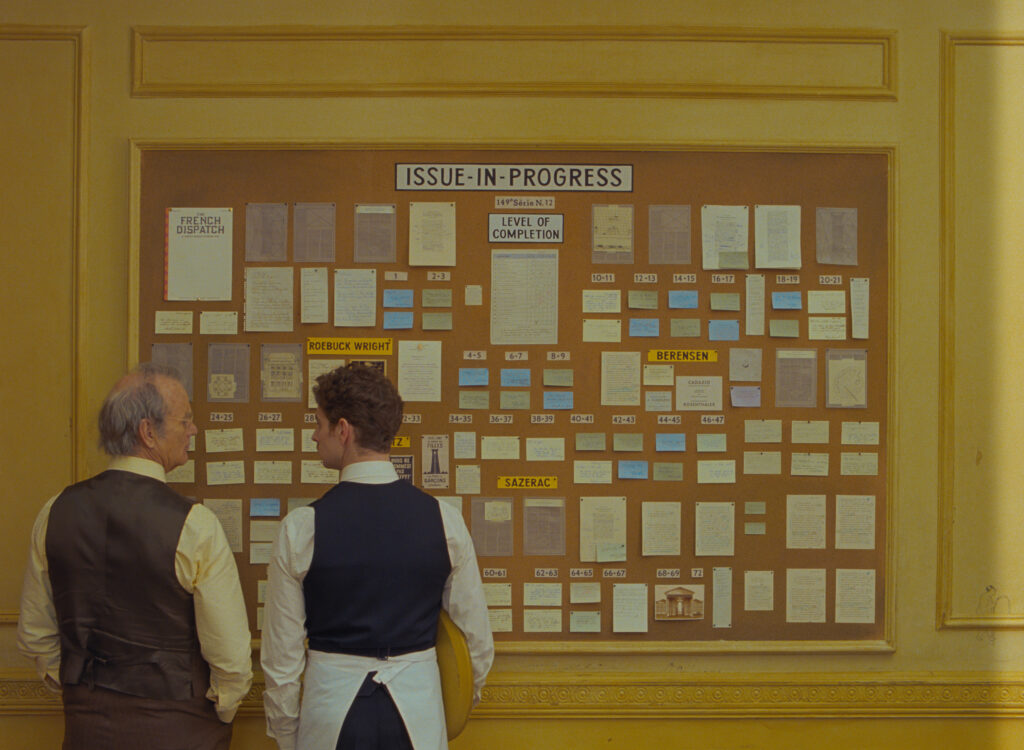