The Hobbit: The Desolation of Smaug: Teaser

Peter Jackson returned to Middle Earth last year with “The Hobbit: An Unexpected Journey,” the first of what will be three films to cover the beginnings of Bilbo Baggins and his adventures with the dwarves where he finds the ring of Power, encounters Gollum, battles trolls and eventually goes up against the infamous dragon, Smaug. The very first trailer for part two of this adventure has arrived online and it is chock full of new characters, more adventures and shenanigans — plus we finally get a first look at Smaug, the dragon.

Watch the very first teaser trailer for “The Hobbit: The Desolation of Smaug” and then read my thoughts on it.

There is a major contrast between the first teaser we got for “The Hobbit: An Unexpected Journey” and this one. Our first look back into this world was elegant, filled with songs and beautiful vistas. Overall, it was quite a beautiful teaser trailer that introduced us to these characters and the quest they were about to embark upon. Now, we already know the characters and why they are on this journey, so we jump right back into the action where we left off.

Instead of narration by Gandalf (Ian McKellan), we now have it from Thranduil (Lee Pace), who we had a slight glimpse of at the start of the first film. In fact, most of the action we see in this trailer revolves around the elves and with them we get our reintroduction to familiar characters as well as a slew of new ones. 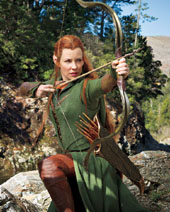 Orlando Bloom is back as Legolas and along with him comes series newcomers Evangeline Lilly as Tauriel (pictured), Luke Evans as Bard the Bowman, Stephen Fry as Master of Lake-town and Mikael Persbrandt in the role of Beorn. One last member of the new cast members to join the series in this second installment would be Benedict Cumberbatch in the role as Smaug the dragon, and you may ask why take such an incredible actor and put him into a computer generated character? Well, Smaug talks, and even though we don’t hear the voice in this trailer, his infamous baritone will be heard in the next two films. The very quick glimpse we get of just the head of Smaug gives us his general look and massive size, I like that they are teasing us without revealing the entire dragon just yet — in fact, this trailer could have ended with the credits coming up at the end and left everyone wanting more.

On a whole, I think Warner Bros. has done a good job with this first teaser trailer. They took what people said they liked about the previous film and emphasized the action and beautiful scenery along with many new locations and really show them off while explaining the quest is still long from over and introduce us to all of the new faces.

Although Warner Bros. is trying to push “The Hobbit” trilogy as a companion to the massive hit “Lord of the Rings” trilogy to help sell the scope of the films, I think that everyone who is familiar with the singular book would agree that the stakes are much higher in “Lord of the Rings,” with darkness and evil trying to rule the entire world, than in “The Hobbit,” which is about a quest to stop a dragon and reclaim a kingdom. I thought “The Hobbit: An Unexpected Journey” was a fun film that was beautifully made, and even though it lacked in the major action department, it was still quite compelling and I personally don’t have to see it as perilous as “Lord of the Rings” to still enjoy it.

“The Hobbit: The Desolation of Smaug” will be hitting theaters Dec. 13 and will be released in 2D, 3D and IMAX 3D.