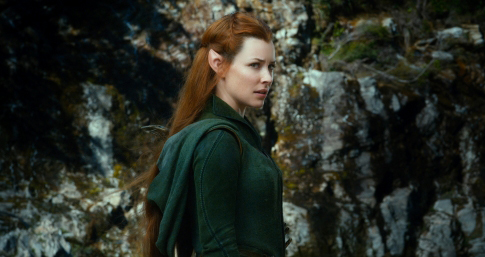 We previously posted the full hour-long video of the Nov. 4 global fan event for “The Hobbit: The Desolation of Smaug,” but if you prefer to skip the Q&A portion, you can watch just the new video diary or the all new trailer below separately, along with my thoughts on each.

First up is the new “sneak peak” of the film. While some people may have been slightly disappointed with “The Hobbit: An Unexpected Journey” — the biggest complaints were the pacing and an over-jovial tone — the naysayers should be pleased as this newest trailer is not only darker in tone but more action-based and full of new footage.

There are also more detailed looks at franchise newcomers Evangeline Lilly as Tauriel (a not-so-normal warrior elf) and Luke Evans as Bard the Bowman, as well as more from Lee Pace, whom we only saw briefly in a flashback previously portraying Thranduil, King of the Elves. Of course, we can’t forget those Legolas (Orlando Bloom) lovers out there, who should be thrilled to see how heavily he is being featured here, especially since he was not in the book for this particular journey.

I am loving the approach we are seeing as we get closer to the end of this story. We are seeing the plight of Thorin Oakenshield (Richard Armitage) take center stage. In addition, we get to see the main reason Bilbo (Martin Freeman) is part of the journey as he will have to steal the Arkenstone from Smaug the dragon – voiced by Benedict Cumberbatch, who just so happens to be Freeman’s co-star on the hit BBC show “Sherlock.” While we have yet to see Smaug in his full and enormous glory, I have seen enough to know I do not envy Bilbo for the task he must do.

As for the behind-the-scenes production video, I always love to see these because not only do we get first looks at many scenes that aren’t in any of the trailers, but we get to see how small the sets are and how much the visual effects artists actually do to help create the world of Middle Earth.

Also, as a side note, isn’t it great to see Ian McKellen as Gandalf messing up his lines and getting upset?

“The Hobbit: The Desolation of Smaug” – which opens in theaters Dec. 13 in 2D, 3D and IMAX 3D – has a unique challenge as the middle film, and therefore the “meat” of the trilogy. It must follow up on all of the open-ended story arcs from the first film, and set up the characters further, while simultaneously keeping us entertained and getting us ready for the end of this epic trilogy “The Hobbit: There and Back Again,” which is set to hit theaters Dec. 17, 2014.

So what do you think of this look behind-the-scenes and the great new trailer? Do they get you even more excited to see the film or were you already sold? Leave a comment and let us know.