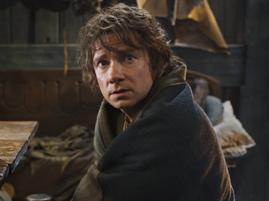 On Nov. 4, Warner Bros., MGM and New Line held a global fan event for “The Hobbit: The Desolation of Smaug” to celebrate the movie’s upcoming Dec. 13 release. Taking place in four cities around the world – Los Angeles, New York, London and Wellington, New Zealand – the event featured special appearances from members of the cast as well as filmmaker Peter Jackson.

Evangeline Lilly in Los Angeles, Orlando Bloom and Richard Armitage were in New York. Luke Evans, Lee Pace and Andy Serkis were in London. And Jed Brophy and Peter Jackson were in New Zealand, where Middle Earth has been recreated for these films. There was a very noticeable absence from the main star of the film, Martin Freeman, but he made an appearance via a prerecorded message.

A live stream event that was watched live by millions showcased questions submitted by fans to their favorite stars, the unveiling of a new three-minute sneak peak trailer and the latest production video diary from on the set of the film. The lucky few who were actually in the theaters were also treated to 20 full minutes of unseen footage from the film. I am told the footage was from five scenes, some of which have been unveiled in the new trailer. The fan event is over an hour long and you can watch it in its entirety below.

“The Hobbit: The Desolation of Smaug” opens in theaters Dec. 13 in 2D, 3D and IMAX 3D and also stars Ian McKellen, Cate Blanchett, Hugo Weaving, Christopher Lee, Aiden Turner, Stephen Fry and Sylvester McCoy, as well as many others.