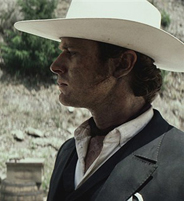 A few months ago, Disney released the long-awaited teaser trailer for “The Lone Ranger.” It made quite an impression on me. At the time I viewed it, I thought the footage looked fun and even edgy. Now, the full-length trailer has hit the web and I have to be honest when I say the anticipation I once felt is now deflated.

Sure, the 2:28 trailer packs a lot of action, and the runaway train scene certainly could be epic, but there’s too much CGI for my taste. Isn’t this a western? Not a sci-fi western like “Cowboys and Aliens,” but a western.

A couple other things didn’t work for me either. I’ll start with Armie Hammer. “The Social Network” actor certainly looks the part of the masked man, but he doesn’t quite embody him. Also, there’s Johnny Depp, who wanted to work on a project where he could revere his Cherokee roots. Maybe it’s the crow on his head or the prosthetic nose and thick face paint, but I’m at a loss as to what look they were going for here. Here’s hoping his appearance isn’t too much of a distraction in the film. And as far as Depp’s voice is concerned, to me it sounds like Jack Sparrow imitating Tonto.

But there are a few things in the trailer that aren’t so bad. At 1:30, we see a young Tonto adorn his face with black paint. Helena Bonham Carter, who plays Red, looks pretty amazing at 1:37. We see Red again when she draws a gun on Tonto at 2:00 and, of course, the end of the trailer finishes with the heart-stopping train sequence. So, given that there are some entertaining gems in the trailer, it’s very possible my misgivings could be derailed come July 3, 2013, when “The Lone Ranger” opens next summer.

What are your thoughts on the trailer? Are you excited about Johnny Depp and Armie Hammer’s next picture? Hit the box on the right with your thoughts.