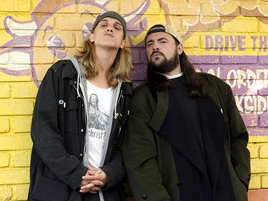 For a while now, Kevin Smith has indicated he plans to leave directing behind him. And for a while now, it seemed that the hockey dramedy “Hit Somebody” would be his last big screen directorial effort. But with that project now slated for television, “Clerks III” could be Smith’s last hurrah.

Smith has expressed frustration with the politics of the studio system in recent years, independently financing and distributing “Red State” in 2011. At the Sundance premiere of that film, he announced “Hit Somebody” would be the last movie he directs. The hockey flick first evolved into a two-part movie, and this month Smith announced he would extend the story into a six-part miniseries.

With “Hit Somebody” shifting to television, Smith tweeted his plans for a new final film:

So with the HIT SOMEBODY shift, the minute Jeff Anderson signs on, my last cinematic effort as a writer/director will be CLERKS III.#TaDa

Based on the tweet, it’s unclear how far into development “Clerks III” actually is. He’s discussed the possibility of “Clerks III” on and off since the release of “Clerks II” in 2006, at one point even floating around the idea of a Broadway play. Anderson, who plays Randal in the first two movies, took some convincing to even sign on for “Clerks II.” But if Smith can convince him and the rest of the core cast to return, and find a satisfying story to tell, one last visit with Dante and Randal could be the perfect send-off for Smith’s directorial career.

What do you think? Are you excited about the prospect of “Clerks III,” or should Smith let Dante and Randal be? Do you think Smith will actually retire at all? Sound off in the comments section.