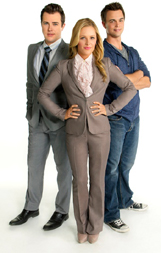 Two best friends accidentally take their relationship to the next level and suddenly find themselves saying “I do” in “The Seven Year Hitch,” a Hallmark Movie Channel original premiering Oct. 13 at 8 p.m. ET/PT, 7C. The movie stars George Wendt (“Cheers”), Frances Fisher (“Titanic”), Natalie Hall (“All My Children”), Darin Brooks (“Days of Our Lives”) and Ryan Doom (“The Roommate”).

Jennifer (Hall) and Kevin (Brooks) have been inseparable since becoming best friends at age six. So when Jennifer graduates from college and begins building a career in charity, she thinks it’s only right to let drop-out Kevin live in her newly purchased house until he gets back on his feet. Seven years later, Jennifer is continuing up the career ladder while Kevin is still golf caddying and waiting for his big break.

Jennifer is happy to let Kevin march to his own beat, but her new boyfriend, arrogant corporate manipulator Bryce (Doom), wants her to kick Kevin to the curb. Oblivious to his cheating ways, Jennifer is ecstatic when Bryce asks her to marry him after only six months of dating, secretly using her angelic reputation to gain favor with his boss Mrs. Von Hoffman (Fisher).

Kevin catches Bryce cheating and is determined to spare Jennifer an unhappily-ever after experience. With a little help from his law school brother, and support from his meddling neighbor Mr. Henderson (Wendt), Kevin finds out he is legally married to Jennifer in a common law marriage after living together for exactly seven years. Now it’s up to Kevin to prove he is Jennifer’s equal – forever.