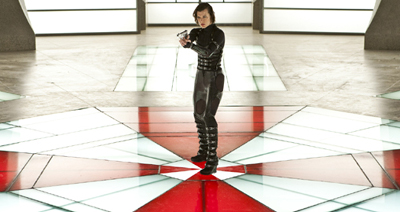 Retribution is punishment that is perceived to be morally just and fully deserved. I can hear the boos and such as I say the fifth installment of the “Resident Evil” franchise is not retribution for the fans. We deserve better. I am by no means saying I hated the film, but I am saying that the film is not up to par as several of the previous ones were. I’ll play the bad guy for a moment and that’s okay, my opinion is not going to be that of everyone nor is it the only point of view around.

The opening sequence of the film is a glimpse of the somewhat kitschy ride the movie presents. I was expecting much more from the opener, as the franchise has done exceptionally well in the past. I knew right away that the camera was going to follow a pattern, and the one thing “Retribution” got right on the money, was the pattern. By no means do I intend to trash the director or the cinematographer, but I just didn’t see use of the technology that “Afterlife” harnessed so seamlessly. To date, “Afterlife” displays some of the best use of 3D that I personally have seen. I didn’t necessarily love that film either, but I loved the look and feel of it. Granted, there are some really great shots and angles, just not on a consistent level. I fear that those awesome shots, however, will be lost on the viewers if not seen on an IMAX screen.

The plot of this sequel maintains the authenticity of the series, but fails to deliver momentum to the story. The entire movie takes place in faux environments, which left me feeling a bit constrained. The concept was fascinating but I think other options could have also been explored by these characters.

Speaking of characters, I found them to be a tad two-dimensional. There is so much history to pull from and I felt as though each and every character left their passion and drive in several movies that came before them. I might be getting picky, but for me, one of the great things about “Resident Evil” was that it was based on a video game, yet instead of playing just to younger folks, it went with the gritty and the unkempt. The cussing has slowly been depleted as each sequel came out, and in this one, it’s almost non-existent. The film has an R rating for its violent tendencies, so why dull down the language so much? It doesn’t compute in my brain.

Before I continue, I only have one thing to point out regarding the plot. I’m not going to say much as I don’t want to give anything away, especially since a lot of people might like this movie and I don’t want to ruin their experience. But the entire film, instead of being its own film that happens to be a continuing story, is one big set up for another sequel. There is nothing driving the plot except the idea that we must leave point A and get to another sequel.

The Umbrella Corporation, as most people know, is the antagonist to humanity, and you know, they didn’t deliver the villain aspect for me as they usually do. I was quite disturbed that one of the main villains sort of just gave up his wicked ways. Not entirely, but if you, as an audience member, take in the often overlooked concept that the bad guy doesn’t always know he’s a bad guy, because their motivations come from a different side of the fence then the hero, then the fact of the matter is that in this film, the bad guy becomes a conformist. In some scenarios this can be a plot amplifier, in this case, it’s sort of mentioned, but with no elaboration or follow through, so for me, it became, “what’s the point?”

One of the biggest marketing pieces to the release of “Retribution,” was having Michelle Rodriguez reprise her role as Rain. I personally enjoy Michelle even though, yes, I am aware she is one of the most type-cast individuals Hollywood has ever seen. But I just can’t help it; she’s so fun to watch. Going in, I had a solid idea of how and why she would return. It turns out it’s exactly what I thought — which works. However, the lack of development on what should have been such an obvious play by Umbrella was not there. What I mean by that, without saying too much, is the lack of emotion from the main character Alice, in regards to interacting with Rain, simply kills the anticipation. Again, what’s the point?” Rodriguez does do well in what she portrays, typecast or not. There is one scene in particular, a fight scene, where I just loved her facial expressions. She delivers sarcasm so well with smallest contortions of her mouth – it was such a blast to watch, absolutely entertaining.

Alice, oh Alice, how us fans love you so. Milla Jovovich completely embodies this character and she continues that path in “Retribution.” I was quite pleased to see that Milla was not looking as scarily thin as she had in the previous films. She looks really good and she is fun to watch all around. Her fight scenes are definitely up to “Resident Evil” standards. They are innovative, over the top, and executed quite well. Thank goodness because that was one of the things that kept me hanging on. Milla actually had some very sweet and tender moments that really showcase her skills. You can see that she’s not just a ball buster, she has potential in other genres, what a relief considering I see this franchise being it’s own worst enemy.

The other much talked about character was another reprise — that of Jill Valentine, played by Sienna Guillory. There was so much more they could have done with her to propel a gripping storyline, but they didn’t. She seemed flat, in the sense that she was basically a brainwashed Tarzan. Jill bad girl, Jill terminate. I can see why they played it as such, as she has become a bi product of Umbrella experimentation, but at times she seemed like more of a zombie, than the zombies.

Zombies, okay, what the entire franchise from video game to film is about. Bioengineered zombies, and I always enjoy the visually stimulating interpretation that “Resident Evil” brings to us. The zombies were pretty awesome in “Retribution.” My only criticism about the zombies is that I wish they didn’t evolve and mutate them so drastically to the point that I now don’t fear zombies as much because the essence of reality is stripped by uber fantastical re-imaging. When zombies appear to be so close to human form that you think for a moment, “oh man, that is not entirely unfeasible,” the edge is taken off. Some of the creations are still super exciting to me and enjoyable. In one scene there are soldier zombies that really creeped me out in their ominous way. All in all, I still really like the look and feel of the undead, which is really the non-beating heart of the film.

If you are going to see this film, I strongly, strongly suggest seeing it in IMAX 3D. I know it’s more expensive, but the film does a great job of making you feel like a part of the scenery. I was heavily disappointed as a whole and I in no way mean to bash all the people that were a part of the project. I know a lot of time and money were utilized to bring a vision to an accepting audience, it just didn’t work for me.

I’m sure it will deliver for many fans and in the end that’s what it’s about. I am definitely not stoked that it’s another sequel launcher. I was really hoping this was going to be it. I didn’t hate the film, and I will probably own it in the future, I mean, whether or not it’s a good installment, it’s still part of the story. The cons outweighed the pros for me on this one, which is tough as a long-standing fan.

“Resident Evil: Retribution” is in theaters now. You can see the film’s trailer HERE.