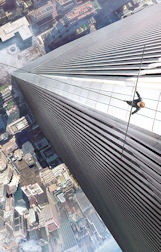 “The Walk” — directed by Robert Zemeckis and starring Joseph Gordon-Levitt — will be the opening film of this year’s Tokyo International Film Festival (TIFF). And closing the 28th TIFF will be Tetsuo Shinohara’s “Terminal,” which stars Koichi Sato.

Serving as head of jury during this year’s TIFF will be Bryan Singer, who previously directed “The Usual Suspects,” which won the Tokyo Gold Prize in Young Cinema Competition at the 8th TIFF.

In addition, directors Isao Yukisada, Sotho Kulikar and Brillante Mendoza have revealed the outline of the upcoming omnibus film project “Asian Three-Fold Mirror.” The three directors will be filming the movie in Asian countries, with the world premiere of the completed project scheduled to be screened in 2016 as part of next year’s TIFF.