“Meru” may be one of the best mountain climbing movies ever made. The insights provided through personal interviews with climbers Conrad Anker, Jimmy Chin and Renan Ozturk, and the narrative by Jon Krakauer, make this film a tightly-woven tale competing with the best fiction there is. 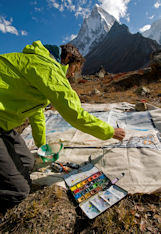 The location is Mount Meru in Northern India. The specific route is the fearsome “Shark’s Fin,” a spire of permanently frozen rock and ice demanding a nearly vertical ascent. The Fin claims more failed attempts by elite climbing teams over the past thirty years than any other Himalayan spire. This is the movie of its first successful ascent as well as the story of the group’s nearly fatal previous attempt.

In the meantime, we get an insider’s view of the “day jobs” of the team, which nearly kills one of the climbers before the final climb. Wife (and climber) Jenni Lowe-Anker provides insight into coping with a mate who simply will not give up the sport that killed her first husband.

Jimmy Chin and Elizabeth Chai Vasarhelyi direct the film by showcasing breathtaking photography that is presented with such graphic clarity that the viewer is scared to death by just the watching.

For those even marginally familiar with the effects of cold and high altitude on the human body, the story is nothing short of a miracle of survival. After their first attempt was thwarted by a freak storm and quickly diminishing food rations, Jimmy Chin left the mountain in a wheelchair due to frostbite. Surviving on crumbs in zero-degree temperatures and howling wind, the trio was lucky to get out at all.

For those familiar with “big wall” climbing, even at sea level, the skill, strength and technology shown are awesome. The trio, apparently using no Sherpas and no oxygen tanks, hauled two hundred pounds of big wall climbing gear up four thousand feet elevation to prepare for the final assault. On the walls, they slept fitfully in a suspended “portaledge” hanging tent, a nylon fabric birdcage of rope and rods continuously buffeted by the prevailing winds. If not completely and correctly supported, the structure collapses, as the climbers learn, into a shake and bake bag of men, gear and wreckage.

The film includes world-class footage of the avalanche that almost spelled the end for Conrad Anker. After seeing that particular sequence, you will never read an avalanche news story in the same way again. The hurricane of automobile sized chunks of ice caught up in the air blast of untold tons dropping almost straight down is not easily forgotten.

The movie experiments with some excellent new visual technologies to dramatize the magnitude of the climb. There are camera shots from vantage points that seem to hover in impossible locations a hundred feet off vertical walls, thousands of feet above a murky, mist shrouded valley below. Computer simulations are used to show a detailed path of the route. Each twist and turn leads to what seems to be an even worse pitch. It never gets easier, only harder, scarier and more seemingly impossible.