This Is 40: Two Trailers 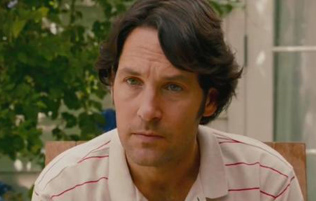 The film maintains its continuity as it takes place a few years after “Knocked Up.” Seth Rogan and Katherine Heigl are not in the film, which for me is a total positive. I’m not super excited for this movie, but it’s one of those that, yes, I will be in a theater watching it when it hits us on Dec. 21.

Paul Rudd is the reason I think this movie can make it on its own. He is one of my favorite comedians and I think it shows in the trailers. I am also really digging the addition of Melissa McCarthy (“Bridesmaids”) as she is hysterical in my book. I nearly urinated on myself when I first saw “Bridesmaids” because of her. Leslie Mann is also a terrific comedic force that will amplify as she bounces off of Rudd. I think there is definite potential for this film to be funny. Throw in Judd Apatow’s writing and I can see why the sort of sequel is not relying on Rogan and Heigl.

Megan Fox also has been added to the roster, which in many cases is a total deal-breaker for me. This is a totally personal preference and I understand that her addition will probably draw in a bigger crowd — a lot of folks enjoy looking at her. Just throwing it out there, but I think Mila Kunis could have very easily fit into this film and a lot of people enjoy looking at her as well That being said, I won’t skip this film because of Fox, as she is not a main character and the other supporting players are enough to get me into a seat.

One thing I am anxious to see is the throwbacks and digs to the first film, because I can only imagine what went into a script such as this. I’m sure there was much to be ad-libbed and plenty of opportunity to tease Rogen and Heigl in the process.

Plot-wise, I am not too concerned with a raunch-com. What is important to me is the joke writing. Judd Apatow doesn’t worry me. All in all, like I said, I am not super-excited. But I will definitely be seeing the week it comes out. It looks like a great buddy film and I’ll be gathering my friends for this one.

As one would imagine, “This Is 40” is rated R for sexual content, crude humor and pervasive language as well as some drug material.