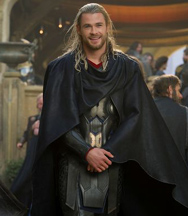 With barely a week until “Iron Man 3” hits theaters, Marvel has given us our first look at “Thor: The Dark World” with a teaser trailer. While we don’t get to see much of the massive blockbuster action in this first trailer, we do get a glimpse of how the tone and the look of the film will be.

When Kenneth Branagh decided not to return to direct the sequel to “Thor,” “Game of Thrones” director Alan Taylor stepped in and is taking this Norse God in a different direction than we have seen before and it is quite evident that the look of Asgard and the overall tone of this film will be different than what we have seen in the past.

When an ultimate ancient evil arises and threatens the safety of the nine realms, Thor (Chris Hemsworth) returns to Earth to take his human love-interest Jane Foster (Natalie Portman) back to Asgard — just in time for the attacks to begin. The dark elves, led by Malekith (Christopher Eccleston), are on the rampage and threaten to destroy all nine realms and neither Thor nor Odin (Anthony Hopkins) will be able to stop him on their own.

Thor must regrettably ask his mischievous brother Loki (Tom Hiddleston) for help in order to save his home and the woman he loves. This will be Thor’s greatest challenge and the proven warrior and leader will be pushed more than he ever has before. Can he muster the strength to defeat the impending doom as the army of Dark Elves march on Asgard and beyond?

Take a look at the very first teaser trailer for “Thor: The Dark World”:

While I was a big fan of “Thor” and thought it was a wonderful introduction to the character and the world he comes from, others weren’t as pleased with the film. It was said to be too light in its tone with the jokes. I, however, was impressed with how they introduced the fantasy and magical elements into the Marvel Cinematic Universe so seamlessly.

Well, they are obviously trying to go in another direction in the sequel as the fantasy element seems to be all but missing in this first teaser trailer and while that isn’t necessarily a bad thing, it is just different. 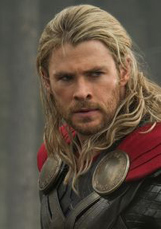 The “Game of Thrones” influence is abundantly evident in everything from the sets to the costumes and even some of the special effects that have a more raw and realistic look to them. I’m not sure if the tone will be as dark as the trailer is suggesting, since the “Iron Man” franchise and even “The Avengers” did very well with keeping a light and airy tone to their films, but maybe this is the new emphasis we will have in Marvel’s Phase Two films.

Overall, I really like the trailer. It teases just enough peril and flashes our new characters and villains ever so briefly to get me intrigued. I am excited to see more of the film and am happy to see Jane Foster reunited with Thor, but this won’t be a honeymoon for the two because between the impending doom from the Dark Elves, and a love triangle between Thor, Jane and Asgardian Warrior Lady Sif (Jaimie Alexander). Thor must also face the wrath of Jane when she questions why he didn’t return for her and when he did return to Earth in “The Avengers” why didn’t he find her?