In Joseph Kosinki’s “Oblivion,” Tom Cruise stars as Jack Harper, the last drone repairman left on Earth after an alien race called “Scavengers” invades. Earth won the war, but after the devastation caused by the destruction of the Earth’s moon, tectonic movements left Earth uninhabitable for the humans. With two weeks left on his mission, Harper feels a need to question what he is leaving behind when he and Victoria are transported to Saturn’s largest moon Titan with the rest of the human race.

The following video (via Collider) contains four different clips from the film that features what happens when Harper encounters a crashed ship with human survivors.

And in this special one-sheet IMAX poster, Universal features the bubble ship in which Jack travels from the tower station where he and his partner, Victoria (Andrea Riseborough), oversee all the repairs and goings on of their sector, high above the Earth’s surface and clouds.

In the poster, Jack stands next to his ship looking over the edge of the deck to the Earth after years of devastation. 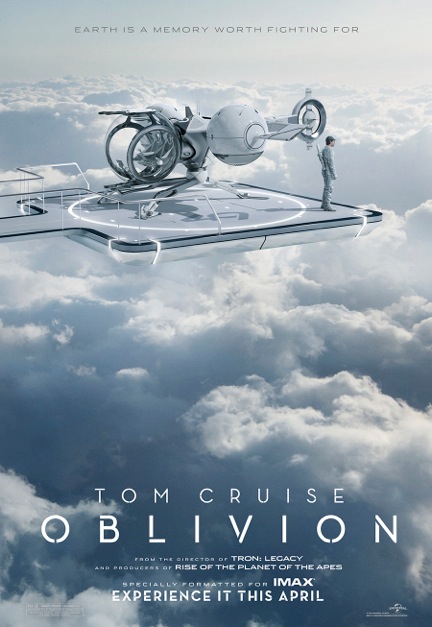 “Oblivion” is out now in theaters. If you’re undecided whether you should hit the nearest movie theater, check out the ItsJustMovie.com spoiler-free review to help you decide.