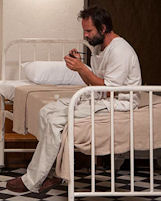 “Three Christs” is as entertaining as it is soul-searching. A brilliant cast, headed by Richard Gere, and a poignant study of mental health make this the new “One Flew Over the Cuckoo’s Nest” of 2020.

Dr. Stone (Gere) is played with powerful compassion as he risks his own life to save his patients from their delusions and electric shock therapy. When Christ #1 (Dinklage) wields a cutting-edge, Stone by-passes the orderlies to calm his patient down. They both end up with stitches, but Stone has now proven his commitment and revealed to all his compassionate mission to save his patient.

While his colleagues had accepted using shock therapy and debilitating drugs for mental patients, Dr. Stone refuses to conform. Richard Gere, from an entry in the director’s notes, observes that Dr. Stone is “highly motivated to be good, and to acknowledge the good in everyone around him. That’s part of the connection he created with the patients, at a very simple human level.”

Christ #2 (Bradley Cooper) has an obsessive-compulsive desire for cleanliness. Stone, in an expensive suit and tie, steps into the shower where Cooper won’t come out, holds his patient, gets the water turned off and wraps a towel around him. The empathy and compassion Stone shows through his embrace of Christ #2 in his mania is a sacred moment.

Christ #3 (Walton Goggins) jumps off the screen with a magnetic, possessed look. He sees deeply into the truth of everyone’s minds and challenges the ability of Stone’s assistant (Charlotte Hope) to be objective. As Hope confesses the incident to Stone, he counsels her with wise choices.

Stone’s wife (Julianna Margulies) reminds Stone that she is smarter than he is. But once his project begins, his priorities change and it’s up to her to decide if she can accept his mission and the process it demands.

While the mental health angles and the characterizations of the three Christs are absorbing, I found the side-story of Stone’s and the patients’ thoughts evocative of irresistibly intriguing questions:

“Three Christs” will linger in your mind. Avnet immersed his cast and crew with access to professionals, patients and deep introspective questions into the nature of schizophrenia and humane treatment. Like viewers of Jack Nicholson in “Cuckoo’s Nest,” you may find yourself asking, “Who’s really crazy here?” 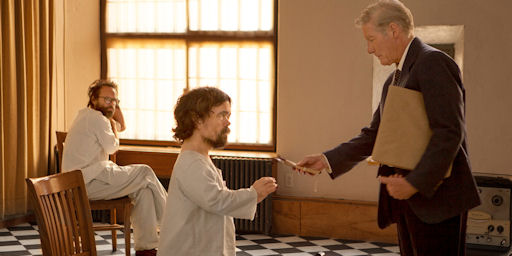 IFC Films released “Three Christs” in theaters, on Digital and On Demand on Jan. 10, 2020.